In this article, which originally appeared in the Aug-Sep 2021 issue of IMPACT Magazine, Pastor Eugene encourages us to trust our sovereign heavenly Father, who works all things together for our ultimate good.

What dark thoughts might have been running through his mind, as he languished in the dank cell of a foreign prison? His life had begun promisingly enough, and he felt sure of better things. The calling he had received in his younger days indicated that he would be in a position of authority. But now—betrayed by his own brothers, sold into slavery, falsely accused and a prisoner far from home—the prospects of that call being fulfilled seemed to lay in tatters.

You may recognise this to be the biblical story of Joseph, beloved son of the Old Testament patriarch Jacob. Joseph dreamed—not one, but twice—that he would rule, even over his own parents and older brothers. “Then he dreamed another dream and told it to his brothers and said, ‘Behold, I have dreamed another dream. Behold, the sun, the moon, and eleven stars were bowing down to me.’ But when he told it to his father and to his brothers, his father rebuked him and said to him, ‘What is this dream that you have dreamed? Shall I and your mother and your brothers indeed come to bow ourselves to the ground before you?’” (Gen 37:9-10)

Burdened by life’s disappointments, some of us may feel as though our life has not turned out the way we expected. Like Joseph, we seem like a long way from where we thought we would be. All this has fuelled our fear and anxiety that we may have somehow “missed our calling”. Have we, then, been relegated to accept “second best”? How should we understand our calling?

There is much we can glean from the Old Testament story of Joseph’s life to help us address such questions. But before that, let’s briefly seek to understand how the Bible uses the term “call” or “calling”.

We often use the term to refer to a strong inclination or desire we have for a particular vocation or life choice. We, perhaps, sense that God wants us to be doing something in a particular place at a particular time. The tricky thing, however, is that the Bible does not use “calling” in this way. Most commonly, “calling” refers to God’s sovereign initiative to save us and bring us to himself. In Romans 1:7, for instance, Paul describes Christians as “loved by God and called to be saints”.

God’s calling has implications for how we are to live in the present as His people. Because God “saved us and called us to a holy calling” (2 Tim 1:9), our way of life ought to be distinct from the world. We have been “called out of darkness into his marvellous light” (1 Pet 2:9b). Therefore, we are to “walk in a manner worthy of the calling to which you have been called” (Eph 4:1). What does this new life look like? Paul goes on to describe: “With all humility and gentleness, with patience, bearing with one another in love” (Eph 4:2). In other words, we are called to Christ to become more like Him.

God’s calling also has a future dimension. We are now being transformed, so that one day when our Lord returns, we shall be perfectly conformed to Him. We are called to this sure hope of future glory. In Romans 8, Paul connects the past, present and future aspects of our calling in an unbreakable chain of salvation: “And those whom he predestined he also called, and those whom he called he also justified, and those whom he justified he also glorified.” (Rom 8:30).

Does this mean that we can’t use “calling” to describe our aspirations for a particular vocation or life choice? Not necessarily. I believe we can still speak of having a sense of calling, as long as we realise that our use of the term is less definite and certain than the scriptural meaning of “calling”.

Why does this distinction matter? Understanding this helps to guard my heart from undue frustration and disappointment. If I cling on to my sense of calling with an attitude of entitlement or even necessity, then I might be closing myself off from the wise and godly counsel of others who tell me otherwise. I might experience crushing disappointment when things do not work out the way I had envisioned or expected. Therefore, it is wise to humbly submit our ambitions and aspirations—our “calling”, if you please—to God. Simply because I desire to do something, does not mean I must and should do it. And it certainly does not mean that I will do it according to my plans and timetable.

Having considered the biblical use of the term “calling”, let’s now turn to Joseph’s life to see what we can learn.

Joseph had a clear calling. His God-given dreams pointed to a divine plan for his life. Joseph was destined to rule, which provoked his siblings’ jealousy. They conspired to get rid of Joseph by selling him into slavery. An Egyptian official named Potiphar then bought Joseph from his Ishmaelite owners.

Initially, things appeared to be looking up for Joseph, who found favour in his master’s sight. Potiphar made Joseph the overseer of his house and put him in charge of all that he had. Potiphar’s wife, however, made advances at Joseph, which he steadfastly refused: “How then can I do this great wickedness and sin against God?” (Gen 39:9b) 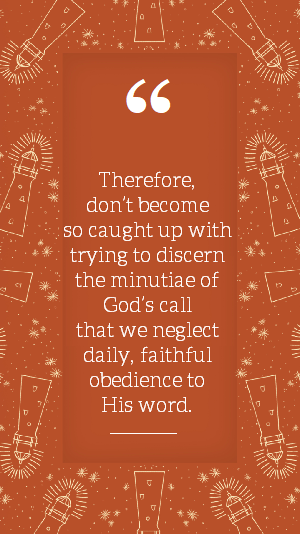 When life fails to go according to our plans, we may be tempted to distrust or disobey God. Joseph, in contrast, is an example of faithful obedience, even when it looks as though he has “missed out” on his calling. We may not know the specific details of God’s plan for our lives, but we do know His revealed will for us, for He has spoken clearly through His Word. God calls us to be holy as He is holy. This is His will for us: our sanctification (1 Thess 4:3a).

Therefore, don’t become so caught up with trying to discern the minutiae of God’s call that we neglect daily, faithful obedience to His word. God is not obliged to reveal to us the full details of His specific plan for lives; He simply calls us to trust and obey Him today. As Moses says in Deuteronomy 29:29: “The secret things belong to the LORD our God, but the things that are revealed belong to us and to our children forever, that we may do all the words of this law.”

Joseph remained righteous in the face of temptation. Yet, he was falsely accused by Potiphar’s wife and thrown into prison. Joseph suffered for righteousness’ sake. Obedience does not mean that life will be smooth sailing. The story of Joseph shows us that troubles and trials do not indicate that we are “outside of God’s will”. In fact, it was God’s will for Joseph to experience affliction. Amid his difficulties, Joseph knew God’s presence: “But the LORD was with Joseph and showed him steadfast love and gave him favour in the sight of the keeper of the prison.” (Gen 39:21)

Troubles and trials can be perplexing, especially if we assume things will be easy just because we are fulfilling God’s call. Difficulties may then cause us to doubt God’s plans for us. The example of Joseph teaches us to patiently endure suffering, especially when we suffer for righteousness’ sake. God does not promise us an easy journey, but He promises to walk with us each step of the way. Seeking to encourage afflicted Christians, Peter writes: “Beloved, do not be surprised at the fiery trial when it comes upon you to test you, as though something strange were happening to you… Therefore let those who suffer according to God’s will entrust their souls to a faithful Creator while doing good.” (1 Pet 4:12, 19)

God was unfailingly faithful to Joseph, even if the pathway to fulfil his promises was not always smooth or obvious. After patiently waiting on God, Joseph was given an opportunity to interpret Pharaoh’s dreams. Thanks to the gracious outworking of God’s sovereign plan, Joseph was appointed Pharoah’s second in command. And, as God had promised, Joseph’s brothers bowed themselves before him in the hopes of buying grain from Egypt.

In fact, all this was a part of a much bigger plan: Not only was God being faithful to Joseph, but He was also keeping His promises to the patriarchs Abraham, Isaac and Jacob (Gen 12:1-3). By bringing Joseph to Egypt, God preserved Abraham’s offspring. Joseph understood the purpose for this painful providence. When he made himself known to his brothers, he told them: “And God sent me before you to preserve for you a remnant on earth, and to keep alive for you many survivors. So it was not you who sent me here, but God.” (Gen 45:7-8a) After Jacob’s death, Joseph again said to his brothers: “As for you, you meant evil against me, but God meant it for good, to bring it about that many people should be kept alive, as they are today.” (Gen 50:20)

God’s plan would culminate with the coming of the promised son of Abraham, Jesus Christ. In Christ, God forms a new people and blesses the nations of the world. Joseph’s story was a part of this larger drama of redemption that would bring hope to the world.

If we are in Christ, then we are also incorporated into this big story of what God is doing in the world. He wisely and skilfully weaves the individual strands of our personal stories into a glorious tapestry of grace. If God has called us to Christ, then He will fulfil His purpose for us. He will keep us by His grace and present us to Himself in glory.

Therefore, even if we do not always understand the ins and outs of God’s providence in our lives, we can ultimately trust in His big plan for His people. In Christ, we can confidently confess: “We know that for those who love God all things work together for good, for those who are called according to his purpose. For those whom he foreknew he also predestined to be conformed to the image of his Son.” (Rom 8:28-29a)

Ye fearful saints, fresh courage take
The clouds you so much dread
Are big with mercy and shall break
In blessings on your head