Through Thick and Thin

Rejoicing in God’s faithfulness and the warmth of the GBC family, Lim Song Huat shares why he chose to return to GBC after living in Australia for 10 years.

In 1986, I was in the second year of my studies at the National University of Singapore when I received the Lord Jesus into my life after a friend shared Christ with me. A fellow course-mate then invited me to attend some events at GBC. I was immediately struck by the warm, welcoming community and the strong focus on God’s Word. Over the next few years, I made GBC my home church and joined a vibrant care group. I made many good friends and grew in my knowledge of God and the Christian faith. In 1988, I got baptised in the sanctuary of GBC. My wife, Eng Khin, and I were also married by Dr Poulson in that same year.

We left GBC in 1994 and worshipped at another church nearer to our home until my family migrated to Perth, Australia in late 2002. However, my links with GBC were kept alive in very unexpected ways even as I was in Australia. It came in the form of a group of GBC men, including many of the former deacons, who were die-hard golfers. These men held regular and professionally organised golf tournaments – where the winner was decided over a few rounds and trophies were even awarded! On a few occasions, they chose the Joondalup Golf course in Perth for their tournament venue – which was where I lived.

Even though I had left GBC for more than 10 years, they would still make the effort to invite me for dinner in Perth. The meals were always delicious but more importantly, it was a time when we reconnected. We reminisced about the times when I taught their children in Sunday School and updated each other on our families and some of the developments in GBC. Over the years, I also appreciated the visits from others who were not part of this golfing group. These visits and fellowship meant a lot to me and my family.

In July 2012, I was back in Singapore to attend a wedding. We noticed that my mother was asking the same few questions repeatedly. Realising that something was amiss, I took my mother to see a geriatrician, who diagnosed her with an early onset of Alzheimer’s. Then came the major decision: What should we do? What would God have us do in this situation? I was the only child and my parents had so far been very independent. With the support of my wife, we decided that I would station myself in Singapore to look after my parents while she remained in Perth as Tessa, our youngest daughter, was only 15 years old then.

I returned to Singapore in 2012 and missed my family in Perth very much. Even though I flew in and out of Perth as much as I could, it was never the same. It was a difficult and uncertain time but one thing I was convinced of: I needed to trust God by staying in His Word, through prayer and by surrounding myself with God’s people. I continued my involvement with BSF, a para-church organisation and also decided to return to GBC. The transition back to GBC was relatively seamless. The people were warm and welcoming, and the strong focus on God’s Word always remained.

Meanwhile, my father’s physical condition deteriorated and he was still a non-believer. His legs weakened so much that he needed a walking frame and later, a wheelchair. His hearing also deteriorated and hearing aids did little to alleviate the situation. However, that did not deter him from coming to GBC with me because he found the people very warm and friendly. Although my father was not a regular worshipper, many people made a special effort to welcome him when he visited the church each week. The ushers faithfully showed him to his “designated seat”. Others visited him at home, bringing food, cakes and desserts – including his favourite Nonya desserts! They shared the gospel and prayed with, and for him. By God’s grace, he received the Lord Jesus into his life at the age of 91, just before he was called home in January 2016.

What challenges have I faced upon my return to GBC? The church has grown and there are many new faces. But this is a good problem and I need to take the initiative, time and effort to get to know others. Of course, GBC is not a perfect church but there is also no perfect church here on earth. Perhaps these imperfections are God’s instruments in allowing us to learn to depend on Him. In that spirit, I will endeavour to serve God and His people here at GBC. 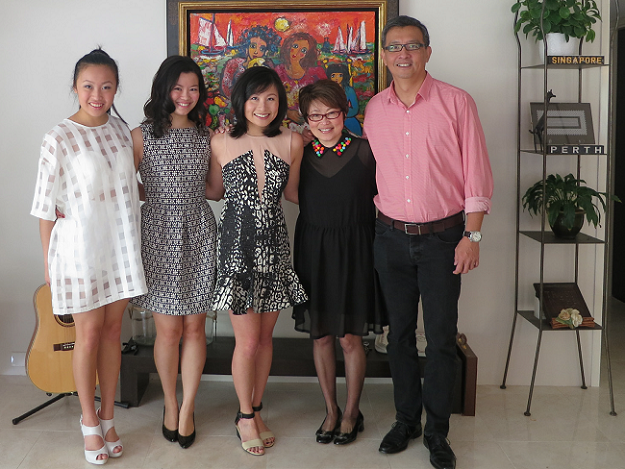 (R-L) Song Huat together with his wife Eng Khin, and his three daughters - Olivia, Andrea and Tessa.