The Unquenchable Flame - Introducing the Reformation

Eric Lui highly recommends Michael Reeves’ The Unquenchable Flame – Introducing the Reformation to all who would like to have a good understanding of what the Reformation is and why it is so important. 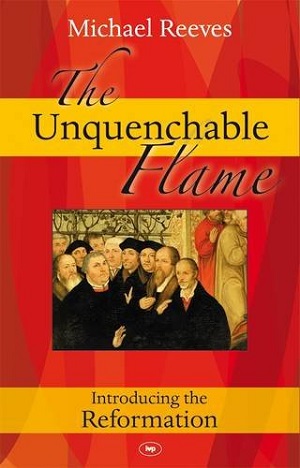 What is the Reformation? Why is it so important in the Protestant church history to remember this event that happened 500 years ago in Europe? In this book, Michael Reeves relates the historical events in an entertaining and absorbing way for us to know a little about the Reformation.

Reeves began the book by describing what Christianity was like in medieval Europe during the 14th and 15th century before the Reformation, when Rome was recognised as the spiritual center of worship and the Pope as Christ’s ‘vicar’ (representative) on earth. After providing the background that seeded the reformation, Reeves traced the history of the reformation all the way back to 200 years before Martin Luther, beginning with John Wycliffe when he was still a priest in Oxford in the 14th century, to Jan Hus from Bohemia who was a visiting student in Oxford and heard the teachings of Wycliffe, and finally to Martin Luther.

I found a particular anecdote very interesting in this section of the history. When Jan Hus was put to death by Rome due to his open critiques of the Roman Church, shortly before his death, he uttered the words, “You may roast this goose (Hus means goose in Czech), but a hundred years from now, a swan will arise whose singing you will not be able to silence”. Almost a hundred years later, Martin Luther unleashed the doctrine of justification by faith on the world. As an admirer of Hus, Luther ardently believed that he was the promised swan: after his death, Lutheran churches use swans as weather vanes, and the Reformer himself would often be portrayed with a swan.

Reeves retold the story of the great Reformer (a summary of which you can find below) from his time as a monk to the council at Worms when Luther refused to recant all his beliefs written in his books that were so damaging to the Roman Catholic Church. At the council, Luther concluded his testimony with these famous words that launched the Reformation as a wildfire throughout Europe:

“I am bound by the Scriptures I have quoted and my conscience is captive to the Word of God. I cannot and I will not retract anything, since it is neither safe or right to go against conscience. I cannot do otherwise, here I stand, may God help me, Amen.”

Martin Luther was not alone as a prophet of Reformation. The author gave lengthy accounts of other spiritual leaders, such as:

There was also a religious group called the ‘Puritans’ in England, which included such luminaries as Richard Sibbs, John Owen and Richard Baxter, which had furthered the thoughts of the Reformation.

Building on these tenets, Reeves concluded the book by asking, “Is the Reformation over?” and the answer is “No”. As Richard Sibbs (one of the Puritans) so aptly put it, the Reformation is “that fire which all the world shall never be able to quench”.

Martin Luther was born in 1483. He became a monk to honour his vow he had made to Saint Anne, who supposedly saved him from a lightning bolt that knocked him down to the ground while he was walking back to his university after a visit to his parents’ home. He was a devout monk, followed strictly the rules of the monastery and denied himself of creature comfort such as warm comfortable clothing and food, thinking that this would please God. He would recount countless sins to the priest in his confessions, typically taking more than six hours at a time to catalogue his most recent sins. Even after that, he found no peace, as he believed that true forgiveness was dependent upon true contrition of heart, which he was unsure that it was his case. His state of mind could evidently be summed up when in 1507 he was asked to say his first mass as a priest. He was overwhelmed with terror because for the first time in his life he would speak directly to the Judge of all the earth. He had never dared do so before, as hitherto he prayed instead to the saints or to Mary. How could he, a sinner, address the Judge?

Later he was transferred to an Augustinian monastery in the town of Wittenberg. He became a teacher of the Bible at the brand new University of Wittenberg, which gave him the opportunity to study the Bible more intimately.

In the meantime, a ‘Grand Commissioner for Indulgences’ called Johann Tetzel incurred his wrath by peddling indulgences for the Church using frivolous jingles such as: “When to coin in the coffer rings, soul from purgatory springs”, and “Place your penny on the drum, the pearly gates open and in strolls mum”. To him, the way these indulgences were being offered meant that nobody needed really repent of their sins. So, on the eve of All Saints’ Day (1 November) 1517, he nailed to the church door a list of 95 theses for debate over the matter of indulgences. Everyone would have seen them the next day. But the theses were not the manifesto of the Reformation. His intention was merely to expose the misuse of indulgences; the theses still affirmed the existence of purgatory, and defended the Pope on the legitimacy of issuing indulgences.

The 95 theses triggered a strong reaction from Johann Tetzel, demanding that Luther be burned as a heretic. Another opponent, Johann Eck, tricked Luther into a debate with him in 1519, questioning him on the issue of the final authority of the Christian faith: Is it the Bible or the Pope? Luther fell into his trap by saying that he could understand Scripture without the Pope, even against the Pope. To this admission, Johann Eck labelled Luther as a heretic, in league with the likes of John Wycliffe and Jan Hus.

But it was not until God had reformed Luther’s heart to see God not as a menacing Judge but a loving Father by trusting in His promise of forgiveness for sin that brought a whole new perspective of the gospel to him. That happened in 1519. His liberated perspective of God and the Bible gave him inexhaustible energy to produce volumes of writings to expound his new-found faith. The first main work, To the Christian Nobility of the German Nation, was Luther’s first trumpet blast of reformation against the defensive walls of Roman Catholicism. This was followed by The Babylonian Captivity of the Church and after that by On the Freedom of a Christian. The latter contained a story of a king who marries a prostitute, which is Luther’s allegory for the marriage of King Jesus and the wicked sinner. This idea of King Jesus marrying a prostitute disgusted many and led the Pope in 1520 to issue a bull, ordering Luther to recant within sixty days or face excommunication and a ban. He refused, and this resulted in Luther being summon by the Holy Roman Emperor, Charles V, to appear before him at an imperial council at Worms.

At the council at Worms, Luther refused to recant. He concluded his testimony with these famous words which launched the Reformation as a wildfire throughout Europe:

"I am bound by the Scriptures I have quoted and my conscience is captive to the Word of God. I cannot and I will not retract anything, since it is neither safe or right to go against conscience. I cannot do otherwise, here I stand, may God help me, Amen."