In the first article on the theme of 'Believe, Belong, Behave' for the Children's Corner of Grace News , Rachel Wong explained to our children what believe is. In this second instalment, she explains to our children the difference between belonging and fitting in, and encourages our children (and us) that we belong simply because we are children of God. 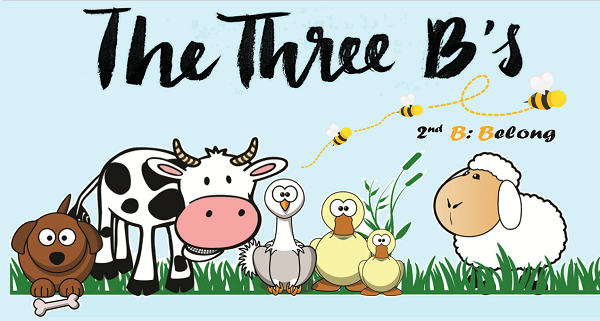 Do you remember the story of the ugly duckling? The ugly duckling didn’t fit in with the rest of his family – he was bigger and a different colour and he was better at swimming than his brothers and sisters. Even the other animals in the farmyard didn’t like him. They pecked him and laughed at him and were so mean to him that in the end he decided to run away.

We all like to feel we belong, whether it’s to our family, our school, our group of friends, or our church. Sometimes we want to belong so much that we change things about ourselves just so we fit in with the group: we wear similar clothes or we talk in the same way and pretend to like the same things as everyone else. We don’t want to be an ugly duckling: we don’t want to be different and stand out from the crowd.

But the important thing is, you don’t have to fit in in order to belong! You belong in a place because of who you are, not because of the things you do. The ugly duckling belonged to his family because he was born into it – he didn’t have to be yellow and fluffy to belong. You don’t have to wear smart clothes and say, “God bless you” to everyone to belong in church! Nor do you have to be the same kind of person and do the same things as everyone else. You belong in church because you are a child of God and part of His people.

Belonging means having a place as the person you are. Fitting in means you have to change things about yourself in order to be accepted by others. Remember what happened to the ugly duckling in the end? It turned out he wasn’t a duck like the others, he was a swan! He couldn’t change himself into a duck no matter how hard he tried, that’s why he felt he didn’t fit in. However, eventually he realised he could be a swan and still belong, so he stopped trying to change himself and was much happier.

God has made you to be one of a kind too, so don’t be afraid to be a swan – or an owl, or a flamingo, or an eagle. As long as you believe in Jesus you belong to God and will always have a place among His people, the church.