Running With and For One Another

The Tokyo 2020 Summer Olympics has just ended early this month. Many of us are disappointed that Singapore did not win any medal this time round. Some of us hoped that Joseph Schooling would be able to repeat the glory that he brought to our nation five years back. But in the midst of some disappointments, I am sure many of us still caught the Olympics fever and enjoyed many of the games, especially when records are broken. I know I did, especially those that involved racing. It reminds me of the amazing feat of human vitality to be able to break a world-class record, which ultimately reminds me of our great and almighty Creator who has created us profoundly.

God's Word uses metaphors of Christians as athletes in a race several times. Paul mentions about self-control and discipline in 1 Corinthians 9:24-27, pressing on toward the goal in Philippians 3:13-14, and competing according to the rules in 2 Timothy 2:5. I am sure many of us are aware that each of us is to exercise self-control and discipline, press on toward the goal, and compete according to the rules in response to the Gospel of Jesus Christ that has transformed and sanctified us.

But how can we live out the athletic metaphor corporately as a church?

Two races in the Tokyo 2020 Olympics astonished me. They are the final races of Men's and Women's 400 metres hurdles, which were won by Karsten Warholm (Norway) and Sydney McLaughlin (USA) respectively. What astounded me was the fact that the runner-ups, Rai Benjamin (USA) and Dalilah Muhammad (USA) respectively, broke the previous world records. I am not a sportsman myself, but I would think that breaking a world record requires the very best sportsman of that particular sport. It is not the norm that records are broken in a competition. Moreover, it is more normal for only the champion to break a record. So when someone who is not the champion also breaks a record, and more so the world record, it is an amazing spectacle to witness and experience.

I have to emphasise again that I am not a sports expert, but I would venture to hypothesise that the performance of the Olympians are affected by their peers, specifically by the one who is in the lead. What it means is that when the race leader is a record breaker, then there is a higher tendency for those who are trailing behind the leader to do better than they usually are. This may help to explain why the runner-ups of the final races that I mentioned earlier did so well. But of course it is also possible that they worked so hard that they have improved their performances so much, and I do not want to rob that away from them.

The author of Hebrews says:

Therefore, since we are surrounded by so great a cloud of witnesses, let us also lay aside every weight, and sin which clings so closely, and let us run with endurance the race that is set before us, looking to Jesus, the founder and perfecter of our faith, who for the joy that was set before him endured the cross, despising the shame, and is seated at the right hand of the throne of God. (Heb 12:1-2)

One wonderful thing about being the disciples of Jesus Christ is that we are not running against and at the cost of one another. Or in other words, we are not competing against one another to become the best Christian, for the title of "the best Christian" has been taken and is not to be contended with. Instead of looking to one another out of fear of being taken over, we are told to look to Jesus who is the founder and perfecter of our faith and has endured the race and finished. Yes, we Christians are to follow in the footsteps of Jesus who is the champion of the race that we are in right now. As we are trailing behind Him, Jesus is helping us to complete this race that we are in with Him well by being the record breaker for the first and final time, setting for us the standard to do well in him.

Just as the Olympians are driven by their competitors in a negative way, we Christians are to be motivated by our fellow brothers and sisters but in a positive way. It means that each of us ought to run after Christ with at least a secondary intention of helping our fellow Christians in their run after Christ as well. In order for that to happen, it requires each of us to have the desire to see our brothers and sisters running faithfully after Christ, and help when needed. That also means that it requires each of us to be vulnerable to one another about our run after Christ. Remember, we are not running against one another. Some of us may run faster and some of us may run slower, and that is alright. As long as we see that our brother or sister is not stopping, sliding backward, or running after other matters, but rather is still running after Christ, it is good enough; keeping in mind that we are to steward God's gifts faithfully.

GBC, so let me first encourage us to run after Christ. Do not stop. Do not slide backward. Do not run after other matters. The run is indeed tiring, and sometimes painful, but our Champion has set not only an example for us to immitate, but also a record-breaking standard for us to follow. So let us run tirelessly and finish well in Christ. He has run the race for us.

We are regathering in-person this weekend, both on Saturday evening and Sunday morning, for service. So if you have been fully vaccinated or have a valid negative Pre-Event Testing (PET), I invite us to come together this weekend where we can meet, share our runs after Christ, and also motivate one another's runs after Christ, encouraging one another to endure, at least over a meal after our service. Get your Eventbrite ticket here, and do remember to bring your Eventbrite ticket, TraceTogether Token or App (Token is preferred), and photo identification (ID) when you come. 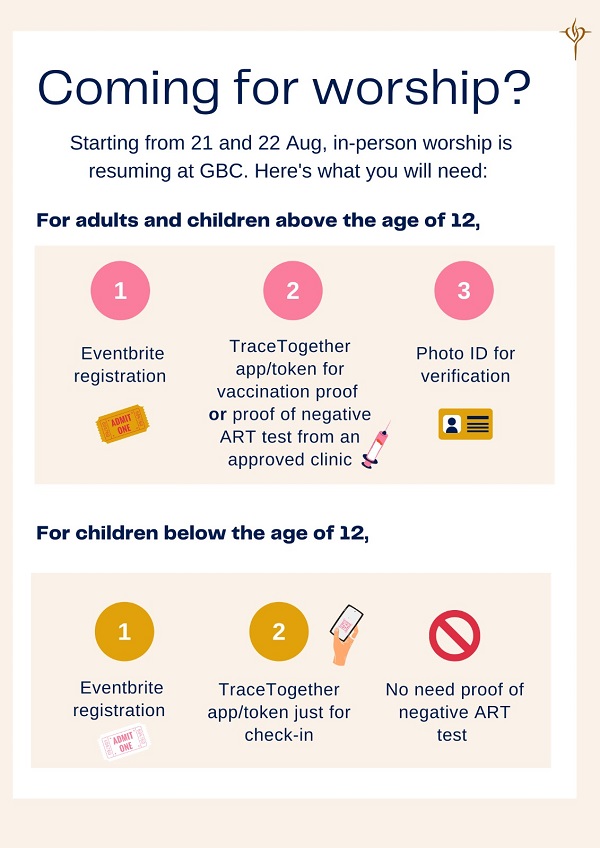