The third Quarterly Congregational Meeting (QCM) for 2021 took place on 4 July via Zoom.

At the start of the meeting, Elder Chuan Xin clarified that he has been chairing the QCMs as he's currently the chair of the ECL (English Congregational Leadership), a role that's rotated among the elders every six months. The next chairperson of the ECL (and QCMs) will be Elder Caleb. He then led us in an opening prayer to commit the meeting to the Lord, give thanks for the resumption of in-person services and pray that those who could gather in the house of the Lord for worship would do so.

Following that, Elder Jonathan encouraged us with what God has been doing in our midst. Giving the analogy of discovering fresh new roots growing deep into the soil in one of his house plants which did not seem to be growing on the surface, he expressed that even though it might seem to some that the church has been languishing with the heightened alert restrictions, God is clearly at work. He reminded us that God has:

1. blessed us with the safe arrival of new babies! With nine new births in 2021 thus far, we now have 29 young children below the age of three in our midst, what a joy!

2. generously added 16 new members to the GBC family, with 3 via baptism and 13 via transfer of membership.

4. refreshed the Children's Ministry with vigour as they resumed classes on Zoom, with ~50 children attending. With the growth in our Children's Ministry, more teachers and helpers for nursery are thus needed, do contact Elder Chuan Xin or Siew Ting if you are available.

5. strengthened our Young Adults ministry which now has ~60 young adults. The YA ministry is currently half-way through their focus on the study of the ten commandments that addresses the shape of Godly living in a social media age. Do keep them in prayer as they continue to press on.

6. started a new Care Group (CG) in the west so that more can be plugged into community. If you are not in a CG or would like to start one, do reach out to Elder Caleb.

7. grown the Precept Class with four new ladies joining and more stepping up to facilitate. The ladies had just completed their study on Isaiah and would be starting a new study on Jude.

8. encouraged a strong turnout for the EQUIP sessions on Mental Health.

9. prompted Yap Kim Meng to start a monthly book reading and discussion group for men that focus on discipleship.

In closing, Elder Jonathan exhorted us to keep pointing one another to God and the wondrous work He is doing, and prayed that we would be faithful and participate in His work to grow the church.

Next, Elder Caleb welcomed the 16 new members who have joined GBC in the last quarter. As each member was introduced, we got to know them a little better as they shared their profession, where they stay/work, the CG that they are participating in and an interesting fact about themselves. The members who were present during the meeting also shared with us how we could pray for them. 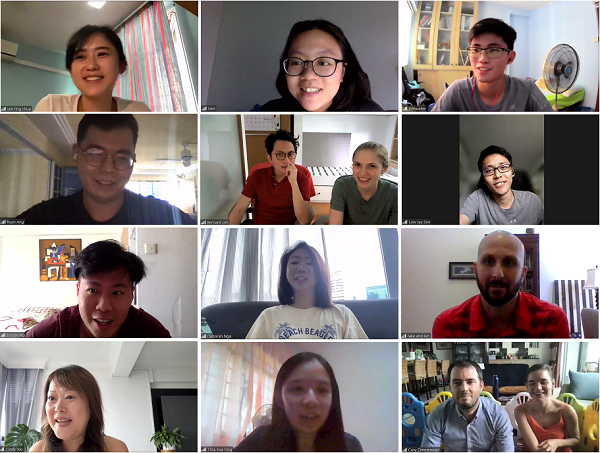 Pastor Eugene encouraged all members to ask for the latest copy of the membership directory from the church office (email Pauline) so as to know one another and to pray through the directory as we seek to strengthen one another.

Moving on to Staffing Updates, Ps Eugene explained that pastoral needs have been growing with the growth in our church and the departure of Pastor Ian and Sherri also meant that some ministry areas need to be filled. To meet these pastoral needs, the elders have put forward Elder Thian Chye to serve as an Associate Pastor for Pastoral Care and Community as announced during the service that morning. Ps Eugene expressed that Elder Thian Chye has been serving faithfully as an elder and he has been a great help in setting up the Member Care Ministry. The ministry has been serving members well with Elder Thian Chye's faithfulness and fruitfulness, and his wisdom in pastoral care has been evident.

In addition to pastoral needs, Ps Eugene added that our communication needs have also been growing the past few years. He remarked that many visitors got to know GBC through our website and we have been seeing increasing work in managing the website as well as other communication channels. Thus far, we have been relying solely on volunteers for our communication needs, but there's a need for a full time staff to come alongside these volunteers to meet the growing amount of work. As such, the pastoral staff has been seeking for a Ministry Support Worker for Communications and Women's Ministry. As the name of the role implies, apart from communications, the staff will also work on strengthening the different ministries for women such as Ladies Wednesday Night Bible Study, Friday Ladies Group, Precept Class, Mums Connect, The Golden Girls etc. This new staff will not lead these ministries but will work with these various ministries, making sure that they are equipped, resourced, encouraged and strengthened. He announced the exciting news that a potential candidate has been found and sought our prayers for the elders and staff as they prepare to onboard this new Ministry Support Worker.

Every year, between July and November, we run a Ministry Internship where a few interns will spend time with the pastors/elders and staff to observe their work, as well as spend a large part of their time reading and reflecting on books on Christianity. They will also meet with members to know them and learn about various aspects of the church’s life. This year, we have three interns (L-R): Rolland Li, Ryan Tan and Samuel Ho.

During the meeting, the interns introduced themselves and also shared with us how we could pray for them as they embark on this five-month journey. Ps Eugene encouraged us to find a chance to meet and know them, and allow them to get to know us as well. We thanked God for raising up these three young men for ministry and prayed that He would strengthen them and give them clarity on their call.

Before the Q&A proper, Ps Eugene expressed his gratitude for the faithful team of godly brothers who have been serving alongside him, both staff and lay elders. He shared that together as a team, the elders are better equipped to serve God's people well as they complement and strengthen each other. Hence, it was with great pleasure that the team of elders have unanimously put forth both Elder Lup Meng and Elder Thian Chye for re-election.

Ps Eugene also revealed that he has approached Elder Thian Chye a few months ago to come on staff to serve in pastoral care, seeing how God has gifted him and given him great pastoral wisdom and care for the people. He has been much encouraged by Elder Thian Chye's self-sacrificial love for God's flock which challenged Ps Eugene to love and care better. Although Elder Thian Chye has expressed reservation given that he might not have the amount of training, the elders have assured him of his competence and character for this role. It was thus heartening how God has shaped the desire of Elder Thian Chye's heart to serve in this way after much prayer and deliberation. Furthermore, Elder Thian Chye has also been taking courses to prepare himself, with much humility and willingness to learn. Pointing us to Matthew 9, Ps Eugene exhorted us to always give thanks for labourers whom God has raised.

Responding to questions on Elder Thian Chye's role as an Associate Pastor, Ps Eugene reiterated that Scripture says that an elder/pastor is the same office and that the affirmation on 25 July is to affirm Elder Thian Chye as a full time elder/pastor. He clarified that the qualification to teach (for all elders and not just pastors) does not mean having a theological degree, but rather more fundamentally, the qualifications are character (1 Tim 3:1-13; Tit 1:5-9; 1 Pet 5:2-4) and are endowed by God. While theological training is helpful, it does not fundamentally qualify someone to be an elder. Both Elder Lup Meng and Elder Thian Chye have been holding on to sound doctrine and faithfully labouring in the Word as they teach and preach the gospel by leading CGs, prayer meetings, EQUIP, CLOBs, in songs, and counselling etc.

Various members also came forth to thank Elder Thian Chye for serving us so faithfully and gently and for his shepherding heart. When asked how he came to know that this is God's calling and how we could pray for him, Elder Thian Chye shared that since five years back, members have approached him to consider full time service given his pastoral heart but he has been shelving aside this call till last year when he struggled to find time to reach out to people while serving in Member Care Ministry. He asked that we focus on what God expects of an elder and prayed that every member would come on board together with the leadership to serve God together and to reach out to people together. It's his desire and prayer that everyone will care for one another so that others, outsiders or within, will know that GBC is a gospel-centred church, that shows love and care in word and in deed. He urged the church to come together and serve together for our mighty God to cause growth in GBC. 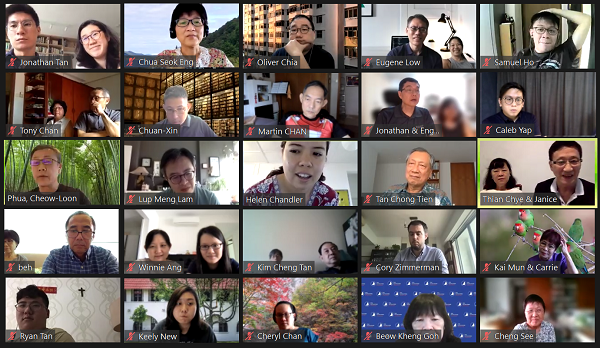 Ps Eugene also highlighted that there will be another Q&A session on 18 Jul at 2pm should there be more questions for both Elder Lup Meng and Elder Thian Chye. The re-election will be by proxy only and the proxy form has to be submitted 48 hours before the ECM on 25 Jul at 2pm. If you are a member of the church and has not received the proxy form, do email the church office or download it here.

As with the practice of this year's QCMs, we were provided with an update of the church's giving, budget and expenses. Elder Chuan Xin stressed that the budget presented and approved by members each year indicates what the church has agreed to in terms of the work of God that GBC has committed to for that year, and emphasised that the financial update was thus given so that members know where we are in terms of resources to support the work.

Elder Chuan Xin praised God that He has given us much and the members have also been giving faithfully to the church. He exhorted that as stewards, it's our duty to bless others as well, be it within GBC or the community at large. He also urged us to look not at just financial giving but also the giving of our time and energy.

Finally, to close the meeting, Pastor Ollie led us in the reading of the Member's Covenant as we remind ourselves of our responsibilities to one another and covenant with one another to love God and His people.