"And now, a word to you who are elders in the churches. I, too, am an elder and a witness to the sufferings of Christ. And I, too, will share in his glory when he is revealed to the whole world. As a fellow elder, I appeal to you: Care for the flock that God has entrusted to you. Watch over it willingly, not grudgingly—not for what you will get out of it, but because you are eager to serve God. Don’t lord it over the people assigned to your care, but lead them by your own good example. And when the Great Shepherd appears, you will receive a crown of never-ending glory and honor." 1 Peter 5:1-4 (NLV) 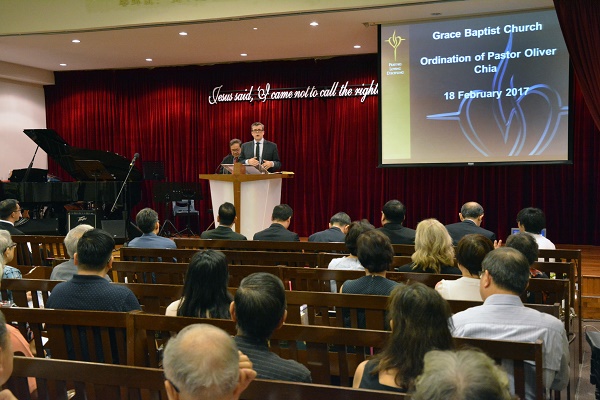 With these verses from 1 Peter 5, Ps Ian began the ordination ceremony for Ps Oliver Chia on 18 Feb 2017 at Kay Poh Road Baptist Church, reminding us that the calling for Ps Ollie into full time pastoral ministry is from God and that the ordination ceremony is held for us to come together as a church to recognise and celebrate this call, to affirm that there is evidence of the fingerprints of the Almighty on Ps Ollie's life and to ask our Lord to continue to stir up good things in Ps Ollie for the sake of His gospel and for His glory and His namesake.

After an opening prayer by Rev Edwin Lam thanking God for the gift of His Holy Spirit and the many talents, gifts and abilities that He has endowed Ps Ollie with for him to serve in GBC and in the ministry, Lup Meng led us in the hymn Glorious Above, praying that all would come to worship the King, and that we—children of God—will tell of His might and sing of His grace. 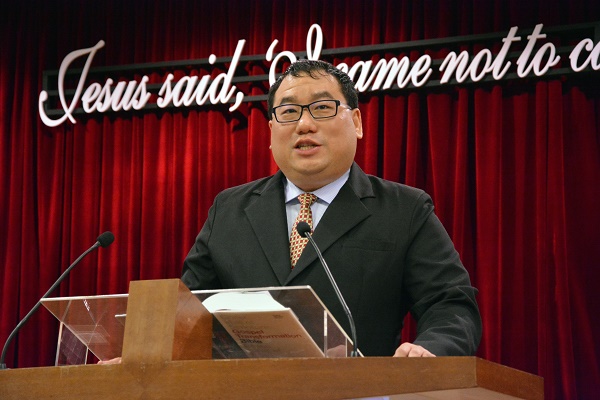 This was followed by Ps Ollie's sharing of his personal testimony. Ps Ollie shared how he came to faith in Jesus Christ in his early 20s when he first understood the gospel and identified himself as the self-righteous brother in the parable of The Prodigal Son. He had held himself to be a good person and to be better than most of those around him, but God convicted him that no matter how good he was, he fell far short of God's holiness and standards. He came to realise that his self-righteousness is a sin of self-sufficiency and rebellion and God, in His mercy, brought him to a point of brokenness and he turned to Jesus in faith, realising that he desperately needed Jesus to save him. Soon after, he became convinced that he was to give his life to proclaim the gospel and to teach the Bible. This personal call lasted from the late 1990s to 2008 and was accompanied by affirmation from church leaders, pastors, elders and teachers as they observed his service in teaching and ministry. After his seminary studies in the US in 2009, GBC invited him back to be a member of the pastoral staff. Knowing the challenges, he was initially fearful and realised that he desperately needed Jesus to help him understand and obey this call. After much prayers and seeking Jesus for the answer, Jesus answered and Ps Ollie was convicted of the need to obey the call.

Ps Ollie ended his testimony with 2 Cor 4:5 – "For what we proclaim is not ourselves but Jesus Christ as Lord, with ourselves as your servant for Jesus' sake." He shared that having served as a pastor with GBC for the last 6-7 years, he has experienced great joy but has also encountered great challenges with much heartache. There were times when he was tempted to throw in the towel but this made him realise all the more how much he needs Jesus' enabling in this ministry. If not for the sustaining of Jesus, he would not be here and he asked the church to pray for and along with him that he will continue to point people to Jesus rather than to himself, that he will keep the focus on knowing and delighting in Jesus and making Him known to others and magnify His name. We also prayed that his life and ministry will bring Jesus' honour and that we will all grow to be more and more like Christ to show the world that Christ is all that matters and how desperately we need Him and the empowering of His Spirit. 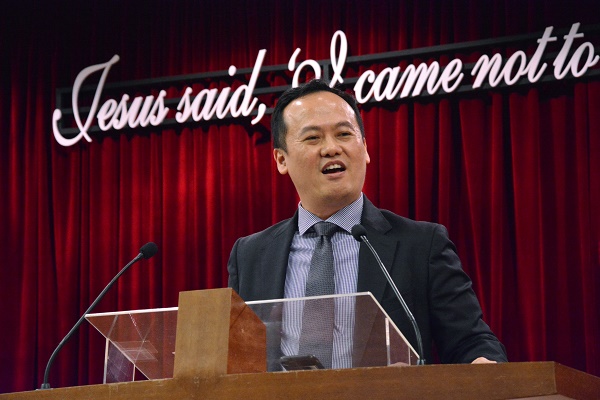 Rev Desmond Soh then shared the three charges from 1 Timothy 4:12-16 that the Lord has laid upon his heart to charge Ps Ollie with. He charged Ps Ollie to:

1. be secure in his identity in Christ and to let no one despise him for his youth;

2. be an example in speech (both in and out of the pulpit), in conduct (in every relationships), in love (to every person whom he ministers to), in faith (in every trials and tribulations) and in purity (so that he will not stumble people from knowing Jesus); and

3. be devoted to Scriptures and be a lover of God's Word,

so that all may see his progress and all people will know that he is a disciple of Jesus. 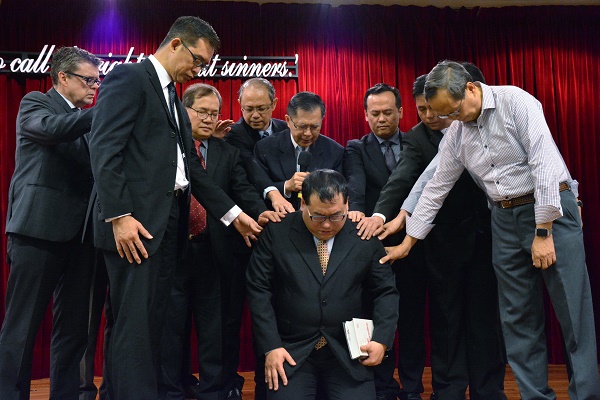 With the charge, the ordination council together with the present and past GBC's pastors laid their hands upon Ps Ollie to confirm his calling and affirm the spiritrual gifts that God has bestowed upon him as well as to consecrate him as a minister of the gospel. With grateful hearts, we prayed that God will bless Ps Ollie and shepherd him so that he would be a blessing to his loved ones, to his church, to his country and to the nations for the glory of His name.

After the prayer of consecration, Rev Lim Teck Peng invited all the members of GBC to stand and charged the GBC family to:

1. support Ps Ollie through our constant prayers and active participation in the church;

2. encourage him to preach and teach boldly the biblical truths and sound doctrines with a teachable spirit and a desire to grow in Christ and for Christ;

3. speak the truth to him, invest in him in hope and in faith so that he may continue to develop and grow as a pastor and a teacher, and

4. continue to love him as one of us – that GBC will continue to be a spiritual home and Rev Ollie will continue to grow not just as a pastor and a teacher but as a vulnerable man, a fallible human being and a brother, who may have his weaknesses but who has nevertheless been called by God.

He closed the charge with 1 Timothy 6:12-16: "Fight the good fight of the faith. Take hold of the eternal life to which you were called and about which you made the good confession in the presence of many witnesses. I charge you in the presence of God, who gives life to all things, and of Christ Jesus, who in his testimony before Pontius Pilate made the good confession, to keep the commandment unstained and free from reproach until the appearing of our Lord Jesus Christ, which he will display at the proper time—he who is the blessed and only Sovereign, the King of kings and Lord of lords, who alone has immortality, who dwells in unapproachable light, whom no one has ever seen or can see. To him be honor and eternal dominion. Amen."

Elder Beh then presented Ps Ollie with the ordination certificate. The church also thanked and honoured Juliana, the sweet mother of Ps Ollie, for her sacrifice by giving up her best to the Lord and to the nations and presented her with a bouquet. Similarly, we are also thankful to Benjamin, Ps Ollie's brother, for his sacrifice in giving up a brother to the pastoral ministry and a small gift was also presented to him by Ps Ollie.

The ceremony ended with the closing song of celebration I will Glory in my Redeemer and the benediction by Rev Bobby Lee.

During the time of refreshment after the ceremony, tokens of appreciation from Ps Ollie were also given to the ordination council for their encouragement, wisdom and time over the last year as they walked alongside Ps Ollie through the ordination process. Indeed, we are very thankful to them and we would also like to thank Kay Poh Road Baptist Church for letting us use their premises for this glorious occasion. 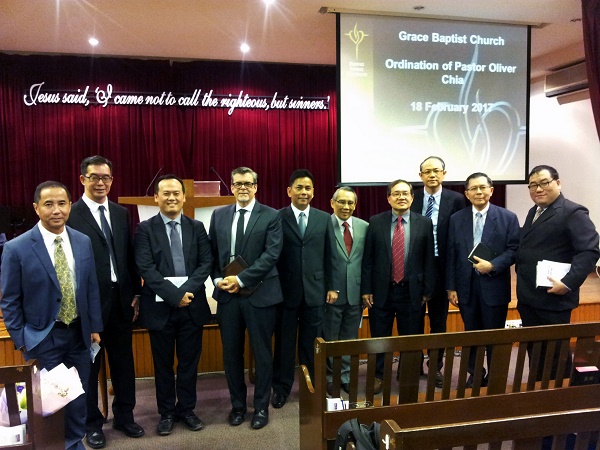