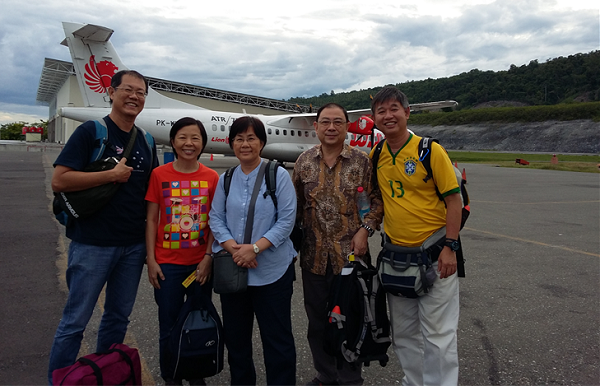 From 31 March to 5 Apr 17, five of us (L-R: Poh Gee, Patti, Yuh Jane, Kim Cheng and Daniel) led by Kim Cheng visited Tzi Ping and family and got to see some aspects of their life and work in Luwuk and in the villages as well. 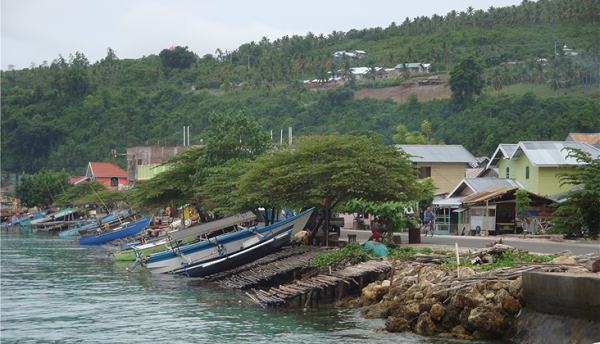 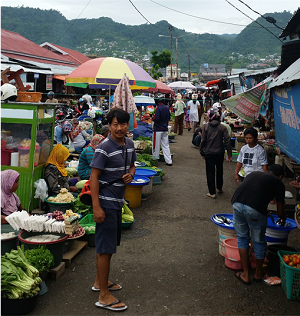 On the Sunday when we were there, Ping brought us to the local market in the morning before worship service at Grace Bible Church. The vendors sold vegetables they grew and fish that were caught in their waters. Ping is usually the one doing the marketing for the family as Heidi tends to get stopped for photos very often when she's at the market as there are only four Caucasians in the town – herself, an American couple who are Ping and Heidi’s co-workers, and Annika, the boys’ German teacher.

This is Grace Bible Church, the church which Ping and Heidi and their co-workers – the Browns (standing behind Daniel) – worship and serve in. The gentleman in purple standing behind Heidi is Pastor Sigit. His house adjoins the worship hall. Their home is open 24/7 to the congregation. During the service, Kim Cheng sent his greetings from GBC to Grace Bible Church and Ping acted as his interpreter. The church has a good mix of different ethnic groups. The majority of the congreation are young adults. It was very heartwarming to hear and to know that this church prays for GBC, and for Ping and Heidi’s work. 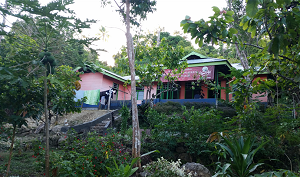 During the trip, we visited two villages that Ping and Heidi frequently visit. The first village we visited was Bulu which is about 5 hours’ drive on dusty and bumpy roads from Luwuk. This is the last house accessible by road, after passing this house, the people would need to go by foot to reach the other houses in the village. Some of the houses take days to reach on foot. Some of us stayed in this house for the night. There’s no electricity or running water. This house belongs to the parents of one of the language helpers, Grace. Grace is a very important part of the language team. She quit her job to help full-time on the language work and is funded by the organization supporting the Leongs’ co-workers. Grace's father is Saluan and her mother in Banggai and they are both believers.

On the left are two of the language helpers who walked to Grace’s house to do language work with Heidi. On the right, with Heidi is Grace who worked with another helper to collect and clarify words in Saluan. The reason for travelling so far to work with the language helpers is so that they do not need to take too much time off from their daily work to help in language work. You can see Heidi with her laptop. It recently broke down, making language work on one of their trips to the village impossible. However, the work goes on as usual. This is because through their language work, the Leongs avail themselves to the people in all these remote villages.

Talking about needy folks, every time the Leongs travel to the villages to do language work, they will bring along rice, oil and other basic necessities for the villagers. The students in the photo on the left are some of the needy ones. They were walking to school, most of them barefooted. They live on their own with an adult who cooks for them. Their parents are far away, many days’ walk from the village. They stay in a hut with nothing in it, only bare floors. Ping would visit them and check on them whenever he visits the village.

Sometime back, our CG received an urgent prayer request for the boy on the right who was bitten by a dog. It happened during one of their village stays. Ping had to rush him to the hospital which is many hours’ drive away. This is an example of one of the many things Ping and Heidi do for the folks there and are such a great blessing to them. Praise God the boy did not lose his eye. We saw him on this trip, healed and happy, running around barefooted.

The folks in Bulu are very loving and hospitable people. The Leongs usually stay for a few days but because we wanted to visit a second village which is 6 hours' drive away, we said our good-byes after a night's stay and two good meals that they served. 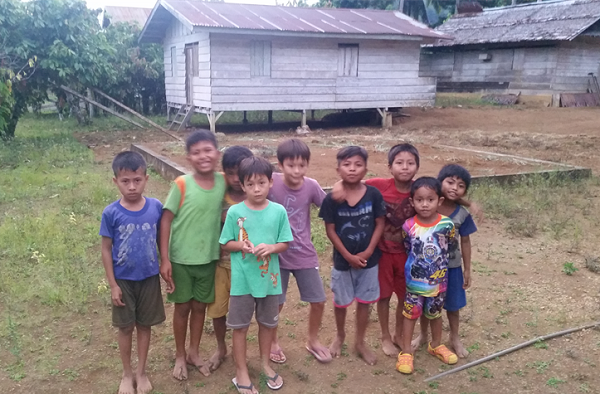 We arrived at the second village, Lokait, after dark. The moment our cars stopped, the village folks came out excitedly to greet us and children’s laughter could be heard. Right away, Benaja and Esra (middle) headed off to play with the other kids.

Lokait is located at the foot of the mountain. The folks in Lokait were very happy that Ping and Heidi visited them. Most of them were their friends from Simpang, the mountain tribe of Saluan people whom Ping and Heidi ministered to years back when they were living up in the mountain. So we spent the next morning following them, going from home to home to visit.

We visited this brother (the one with a guitar) in his home. He is blind but he is oh so joyful! He composes his own songs and sang us one of his songs. One of the things we observed during this short trip is that Ping and Heidi really love the villagers very much and the folks, young and old, cherish them greatly too. They brought down from Simpang (6 hours’ trek away) fruits they grew and mushrooms they picked from the forest as gifts for Ping and Heidi. Those who were sick asked for prayers and Ping and Heidi were generous with their attention and their resources, giving when they see needs and caring in very practical ways. 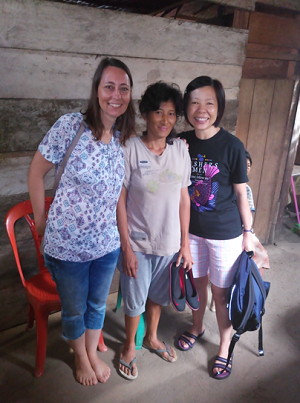 The lady in the middle is Monse. Last year she was taken critically ill and the hospital couldn’t help her. In fact she was given a lot of medication and her condition grew worse. Ping and Heidi took her into their home and nursed her, giving her proper nutrition, vetting the medication given to her and stopping the medication that were making her weaker. She eventually grew stronger after a long time of care and returned to her village here in Lokait. Heidi was so happy to visit her and introduced us to her, telling her that we were the ones in Singapore praying for her.

We had an exciting week in Indonesia and two weeks’ ago via our CG whatsapp chat group, Ping and Heidi shared updates on their work on the Saluan Dictionary Project. Through their work with the Governor and the Ministry of Education, Ping and Heidi have gained trust and respect from the authorities as well as from the people there. 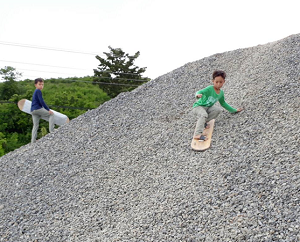 As Ping and Heidi continue to obey the call to this mission, let’s remember them in prayer. Pray too for Benaja and Esra, especially for protection. These boys are active and with no playground to go to, they have to find their own. Here they’re sliding down a granite pile with boards Ping put together using waste materials such as bicycle tyres and tin roofing sheet. Like this mound of stone, the work the Leongs are doing in in Indonesia can be very hard. Let’s pray for the Leongs and Indonesia.