In the second instalment of our series called 'Know Your Leaders', Elder Wee Thiem Heng shares with us how he came to GBC and the joys and challenges of being a spiritual leader of the church.

1. Could you introduce yourself to our readers – for example what you do for a living, and tell us a bit about your family members.

As many at GBC would know, I have been a dentist for 30 years. Together with my wife Belinda we have three children, Benjamin, Elizabeth and Isaac. As a family we enjoy going for walks in the park and playing board games – just spending time together. 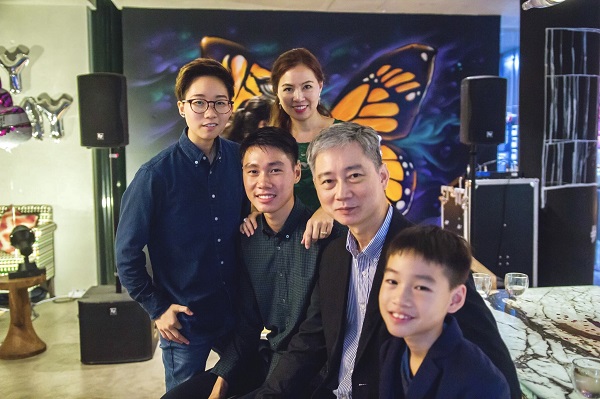 2. Please share with us what you understand your responsibilities to be as an elder/pastor of the flock.

Elders are spiritual leaders that guide believers to a knowledge of God and to grow in Christ-likeness. As an elder I serve GBC members by looking after them in various ways. In GBC we have a big mix of different age groups, socioeconomic and cultural backgrounds – it is a diverse gathering of people, and part of serving this people as an elder is to bring them together to serve one another, united in Christ.

I grew up in a Taoist background with a family very opposed to Christianity. As the youngest among my siblings, one of the first rules I learnt growing up in my family was, “do not become a Christian”. Consequently I tried my best to avoid Christians and any exposure to them, and never took what they said seriously. By God’s grace I was put in the midst of a group of Christians at Dental School. We were a small cohort who bonded through our studies and time together. Over time I saw God’s presence in their lives as manifested in humility and genuine care for one another. This paved the way for my heart to receive Christ. Later on my older brother also became a Christian and introduced me to GBC in 1984.

4. Which ministries have you served in at GBC in the past, and which are you involved in at the moment?

I was a member and then chairman of the choir and music ministry for a long time before I became an elder. As a church elder I’m overseeing the areas of missions and evangelism and am a member of the Missions Committee. I am also part of the Project Khmer Hope (PKH) team led by Kim Cheng that goes to Cambodia 1-2 times a year – we have been doing this since 2010 – to provide dental services and English teaching to rural children. This gives me the opportunity to see a mission work in progress on the field and I see value in returning year after year as we build relationships with local staff. (Read more about the PKH ministry at GBC here.)

Group photo of the PKH team from GBC with the students at PKH (Aoral Centre) in Jun 2017.

Greatest joy – One of my greatest joys is to see people gathered in unity and one-heartedness, like the sentiments that are evoked from watching the National Day Parade or orientation groups shouting in unison for their group identity at school camps. In the church, this plays out as God’s people gather as one, united in Christ. The joint decision for the church rebuilding is one incident that stands out for me. At the momentous meeting when both the English and Chinese congregational leaders made the decision, I shared from Numbers 13-14 where the lack of belief in God’s goodness and faithfulness by the 12 spies sent by Moses to spy out the land of Canaan led to another 40 years of wandering in the wilderness for the Israelites. The rebuilding decision had been 10 years in the making and each time we looked at the odds our hearts had melted, like the spies. It was great joy indeed for us to come together to finally decide to apply our faith in God’s provision through the decision for rebuilding, which for me reflected a unity in Christ.

Greatest challenge – Truly the greatest challenge has been to balance the demands of service as an elder with family needs which are constant and ever-changing, such as parenting amidst developmental changes in the society. Giving time to my family often competes with giving time to the church in my capacity as elder.

6. The Bible tells us to honour our leaders. In that light, how can we pray for you and encourage you meaningfully?

Please pray that as a church we will exhibit ourselves as a people of God showing love for one another and for the community at MacPherson; and pray for my role as elder in helping to lead GBC towards this. Pray for continued wisdom in leading my family as well. Thank you for praying.