Jesus; His Divinity, His Humanity

Sam Tan explains how the study of Luke with the young adults made it absolutely clear to him that we must be radically dependent on God.

When the Young Adults Ministry began our series on Luke in the beginning of 2020, I went into it with feelings of both anticipation and uncertainty. For context, we had just undergone a mass reshuffling of our small groups—I myself was put into a group that, though comprised of some individuals I already knew, still promised to surprise with yet undiscovered interpersonal dynamics. Not long after, we were of course thrust into the pandemic we still contend with today along with the changes it has forced upon us in being more creative with how God’s people meet. Further still, my small group continued to see a change in its membership over the past year, in both the welcoming of new friends and the parting of old ones. At one point, I even became a leader in the ministry, something I had never anticipated nor imagined for my life as a previously callous churchgoer with very poor theology, and something I still feel scarcely prepared for even today. All this is to say, as many have already ceaselessly pointed out, that our theme of Radical Dependence has been nothing short of providential, ordained even. 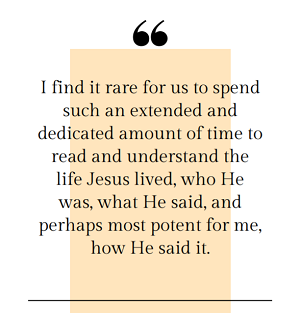 But in this short reflection, rather than simply point out where God has given us opportunities to be dependent (which I think would result in something far too autobiographical), I want to ponder on the question why it is that we must be radically dependent on him, and how our study of Luke made this absolutely clear. Ironically, I find it rare for us to spend such an extended and dedicated amount of time to read and understand the life Jesus lived, who He was, what He said, and perhaps most potent for me, how He said it. I find that for us so ingrained and perhaps even comfortable in a faith of big, divine ideas, we allow the personhood of Jesus to be eclipsed, a personhood that should be for us a barometer that tells us what the state of our heart is. It is in this personhood, this humanity, that I find every reason we can only be, through understanding the Son, completely dependent on the Father.

For me, reading about Jesus’ life in such detail has revealed the tiny space within which He thinks, speaks, and acts; where rebuke and encouragement are coincident, where explication and mystery are complementary, where obedience is shown to be thoughtful rather than mindless. I found myself asking how it is that a man was able to have such harsh words for those blind to their folly, and such loving ones for those desperate for help. How is it that a man says so much in saying so little, where wisdom is found both in the words we read on the page and those between the lines? How is it that a Son might desperately ask his Father to take away His suffering, but choose to follow His command out of love for us? Contradictory as it may seem, I find this the character of Jesus to be rather than paradoxical, singularly perfect and absurdly specific, straddling the fine line between superlative versions of what man can be. And I wonder if we realise that to grow in Christlikeness means to grow into a person with these characteristics, to aspire to them not in idyllic daydreams, but in desperate prayer.

I sometimes hear it said that God is more than enough for us—I disagree. To say that He is more implies there is something out there less that may also be enough for us. The only thing that is enough for us is God. And this thought is important as we contend with this seemingly impossible task of aspiring towards something so singularly perfect and absurdly specific. I’m sure you’ve heard that baking is a science, not an art. A recipe for a cake comes with very specific ingredients measured sometimes to the milligram. All this has been calculated, from the protein required to create the spongey texture of cake, the flour-water-fat ratio, to the balance of flavour. More still, anything from the consistency of heat from your oven to even the humidity in the air could affect the outcome of a bake. My point is, there is a singular set of conditions that will produce a singular version of a cake. If we are dependent on anything but God in our lives, if we stray from that singular set of conditions, we in our sin would be people who might love to the point of wilful ignorance, or rebuke to the point of reckless judgement. And Jesus was neither of these things.

The irony of the opportune coincidence in this pandemic and our series in Luke is that really, it changes nothing. It doesn’t matter that I was placed into a new small group, or that the group continued to change, or that I now lead it. Because regardless of our circumstances, in whatever situations that may present as certain or uncertain, if we who have been transformed by the gospel want to praise and glorify God, then we must strive to be holy, like His Son. And the only way we can do so is in radical dependence on Him.