We interview, Kuan Kok Pui, who has been faithfully serving as our Church Administrator for the last 9 years on how he came to faith and what his future plans are following his retirement from this role.

1. Hi Kok Pui, many in the church have been served by your ministry but they may not know the man behind the work. Could you share briefly about how you came to faith and GBC?

It was during my national service days when I was 18 years old that I met Caleb Chan (Jimmy Chan’s brother) and Khoo Kah Leong. Caleb slept on the double decker bed above me and we both lived in the same HDB estate. It was Caleb and Kah Leong who introduced me to GBC in 1978 and it was God’s answer to my prayers for a home church. I was baptised and joined GBC as a member in 1979.

It was during one of GBC's missions conferences in the 80s that I heard the Lord’s calling. I wanted to make a commitment but held back because of my mother. I told the Lord that I have a responsibility towards her as a son for the sacrifice that she has made for all 6 of us as a widow. After reading biographies and testimonies of missionaries, I prayed and responded to God’s call in taking my mother as my mission field. When that decision was made, looking after my mother was no longer a chore but very smooth sailing and a joy too. My mother subsequently came to know the Lord and was a baptised member of GBC’s Chinese Congregation for over 13 years. She also became my strongest prayer warrior and thus when the Lord took her home, it took me more than 3 years to recover.

When the company that I was working for was sold to a venture capitalist, I was reminded of my calling by God. I decided to stay put in Singapore and declined the offer to work in England. With the help of Ric Poolman and Jonathan Yao, I joined Cru Asia’s China office for a 6-month stint in 2003. At the end of the 6 months, God provided me with a job in Dongguan, China. I worked there for from March to December 2004 but I did not like the life there and so decided to come back. Upon my return, I used the break from work to visit my sister in Vancouver and friends in England.

Not long after in August 2005, I started to work with Beh Soo Hee (Beh) on his business project in Indonesia. Subsequently in April 2007, I decided to join GBC to help Pastor Peter Lin run GBC’s The Purpose Driven Life campaign based on the book by Rick Warren. This lasted till December 2007 and my former boss approached me to return to help him in January 2008. The company sent me to Paris for their project from 2009 to 2010, and I really enjoyed my time in Paris and travels to USA, Brazil, Italy and France.

During my time in Paris, Beh has been in communication with me and he always asked me what my plans were after Paris. I was reminded of my commitment to God through the offer of the position of Church Administrator in GBC. After much prayer and deliberation, I accepted the role of GBC’s Church Administrator as my mission field in October 2011. The position allows me to keep my commitment to God and also a desire to finish my Christian race well. 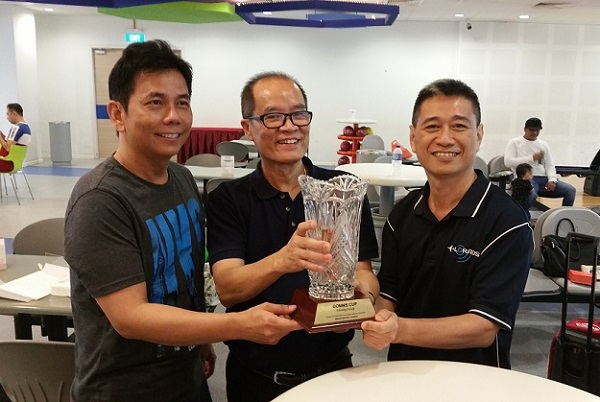 Finishing his race well! Kok Pui (middle) was one of the team members who have won the Comms Cup (a GBC inter-gender/generation bowling friendly) for three years in a row from 2014-2016! With him were Rev Bobby Lee (Executive Director of Singapore Baptist Convention and GBC's former pastor) and Samuel Tan (Pastor of Coronation Baptist Church and a former GBC member).

2. What are some joys and challenges that came with working in this role? How have you seen and experienced God's faithfulness?

The role as an administrator is huge and the scope and responsibilities continue to grow daily which I did not envisage. I thank God that He has prepared me well all these years for this role and also the ability to embrace new responsibilities. Accounting, finance, treasury, HR, administration and operations were nothing new to me but the environment and culture is different. The focus of a commercial organisation is profit and loss while a faith organisation focuses on faith and love.

Furthermore, in my corporate life, I was always the number 2 in the local office that I worked in; but in a church, everyone has become my “boss”. Trying to show love amidst some unreasonable requests stretches my faith and patience. As I surrender to God daily for His moulding, I thank God for enabling me to keep my testimony. This I believe, is due to the interceding of many dear brothers- and sisters-in-Christ. I would like to thank them for coming alongside me, listening to me when I was down, and encouraging and praying for me.

Another difference is that I don’t have any “job perks” compared to my previous jobs. Each time when the devil reminds me of the privileges and perks that I forgo, I am reminded of the sacrifice that Christ has made on the cross for me—His life. When I think of Christ’s sacrifice on the cross for me, my sacrifice then becomes insignificant. I thank God for the joy that He gives me in serving Him and also the joy and love to serve many (who I now know better) as a family member of Christ. 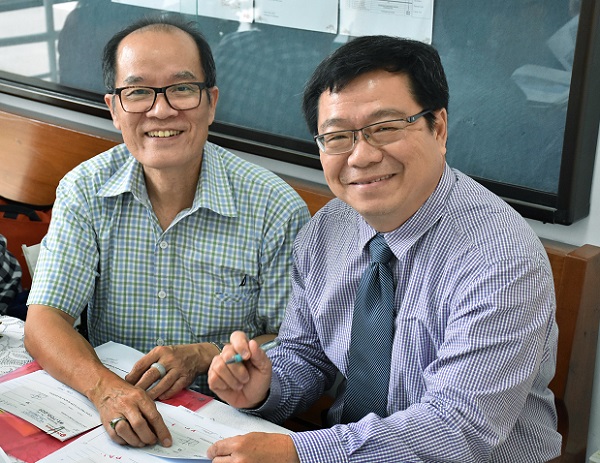 We are so thankful for Kok Pui's faithful service over the years in ensuring the smooth and orderly day to day running of GBC. He's seen here with former Director of GBC, Jason Chua who's from the Chinese Congregation.

3. What are some future plans and how can the church be praying for you?

I will certainly not be a couch potato. I have a lot of relatives and good friends overseas and locally and I plan to spend some months in Vancouver with my sister; England with my brother, godson, good friends and ex-bosses; Paris with my friends and a refugee family whom I got to know when I was in France. Of course I also plan to spend time with many good friends in Singapore!

I would also like to continue to use the gifts and talents which God has given me. After my retirement in April 2021, I will be working part time in GBC for a year on accounting and finance to help Gideon transition into the role. I have also committed myself to be the pro-bono treasurer of the Singapore Baptist Convention for 2 years starting November 2020.

If I have more free time, I hope to enjoy the rest that God has given me and most importantly to rest in Him. 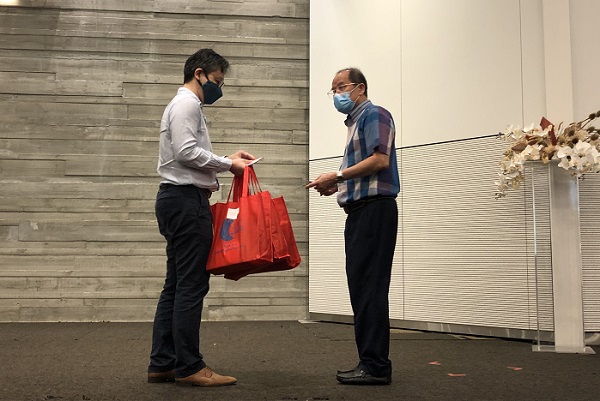 Kok Pui receiving a token of appreciation for his faithful service during our worship service on 22 Nov 20.