Last month, a team from GBC headed to Kathy's Home at Pua, Thailand to conduct Vacation Bible School (VBS). The team shares with us how God has put together the VBS programme.

I will extol the Lord at all times;
his praise will always be on my lips.
I will glory in the Lord;
let the afflicted hear and rejoice.
Glorify the Lord with me;
let us exalt his name together.

At the end of Aug 2019’s English Camp at Kathy's Home, it was proposed that we conduct a VBS for March 2020. No one had any specific plan or even idea of what the programme would be like at that time. Thus, it was only a proposal with no definitive decision. There was always the usual English Camp to fall back on with the faithful group of teachers from GBC.

The decision to go ahead with the VBS was only confirmed in late Dec 2019/early Jan 2020. After deciding on the materials and format, we struggled with the availability of teachers to conduct the VBS if we were to incorporate craft, songs and games within the VBS programme. Besides Bible stories and activities, we were also mindful to incorporate English learning in the programme. The different English proficiency levels of the children posed additional challenge for us when we were trying to put together the programme.

The planning team first decided on the theme of “God is good… All the time!” and decided rather quickly and without much difficulty the five Bible stories that we would cover for the VBS: God’s promise to Abraham, God’s people in slavery, God’s deliverance of His people, Israel’s disobedience in the wilderness and finally Israel entering into the Promised Land.

The other “supplementary” activities to reinforce the Bible stories were recommended but were tentative as we couldn’t confirm the people leading the various stations. Our initial plan was for Siew Kim to take on the Games Station, Grace to do the Craft/Songs Station and the remaining teachers to conduct the Bible Story Station. We also needed teachers to lead the different groups from station to station.

In mid-January, the planning team went into overdrive to put together the five Bible stories for three different levels of English proficiency. At the same time, research and suggestions for the various games and crafts were made but we weren’t sure who would be available to take on these stations and lead the groups. We prayed.

God answered and the team was formed...

The team members for this trip were initially few in number and rather volatile, with people signing up and eventually dropping off. In the most amazing way, without us approaching them, Jonathan and Esther Lai signed up in late January to make their first trip to Pua. And in early February, Stephen Sanglir (Mak and Narola's son) and his fiancée Joanne Cheung, who are both based in Bangkok, volunteered to help out! This finalised the full VBS Pua Team. God indeed saw to our needs for this VBS. We marvelled at the providence of God! 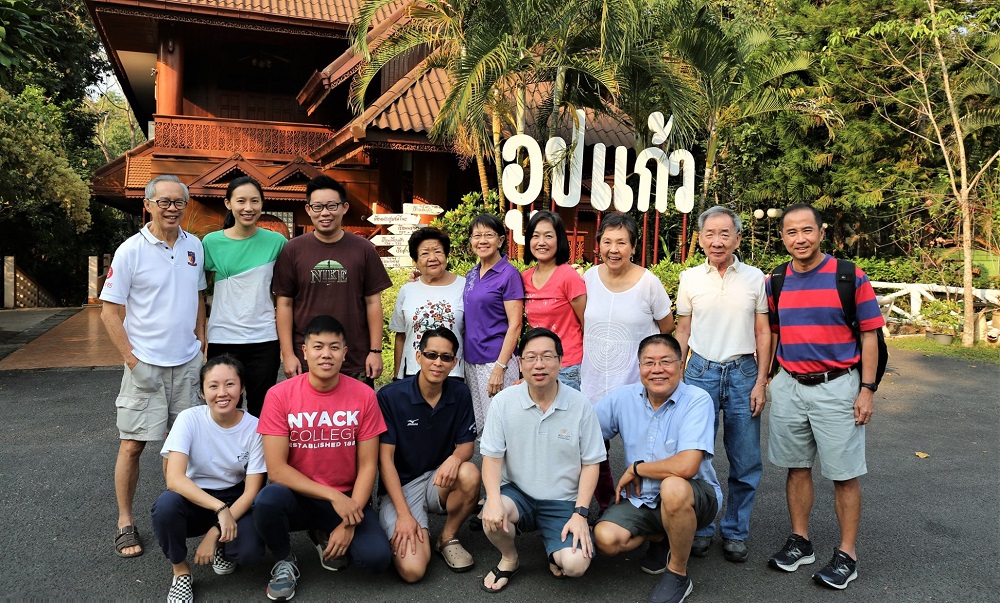 The entire travel plan was rather eventful. Singapore had started to see an increase in cases of Covid-19 infection in late January 2020. The team’s decision was still to go ahead with the trip. Most of us had booked our tickets and were ready to travel, praying and trusting in God that He who started would bring it to completion.

We were mindful that situation might change any time. We also wondered if we would be barred from entry to Bangkok or would we be quarantined upon arrival in Bangkok? At the same time, we did not want to be a risk to the children at Kathy’s Home.

Amidst the uncertainty, we carried on with our pre-trip briefings and continued with our various preparations – Esther learning the songs with actions, Jonathan coming up with the samples for the crafts and Kim Song and Beh constantly refining the materials for the Bible stories and the scripts for the skits.

On 27 February, AirAsia notified us that the flight from Singapore to Bangkok was cancelled. We were presented with a few options on how to get from Singapore to Pua. There was some initial confusion but no “backing away” from the trip. We deliberated on the options and by 28 February, all the team members were rebooked on an earlier Scoot flight to Bangkok. We were still on track for our trip to start the VBS on 6 March.

On 4 March, there were news that visitors to Thailand from nine places, Singapore included, have been advised to self-quarantine for two weeks and report their whereabouts to the Thai authorities (Source: Straits Times). At this time, some of us had already checked-in our flights departing from Singapore to Bangkok and no one from the team had any second thoughts about making the trip despite the potential confusion on the ground.

On the same day, another piece of news came in: “Singapore Thai embassy clarifies Bangkok advisory; healthy Singaporeans need not self-quarantine upon arrival in Thailand (Straits Times).” And with this, the trip was 100% on!

We arrived safely in Bangkok. There was some confusion at the immigration and we were directed to different places by different officers for health declaration and immigration clearance. Nevertheless, we thank God that we managed to clear customs smoothly and had an uneventful journey from Bangkok to Nan and onwards to Pua.

The VBS started as planned!

We started the VBS with the usual introduction on Friday at about 6:30pm. The children, as always, were warm and excited! We went straight into telling the story of God’s promise to Abraham and that Abraham believed God and obeyed (Genesis 12, 15, 17 and 18). The children were divided into three levels of English proficiency to discuss what they have heard and to assess their understanding with worksheets provided by Kim Song. 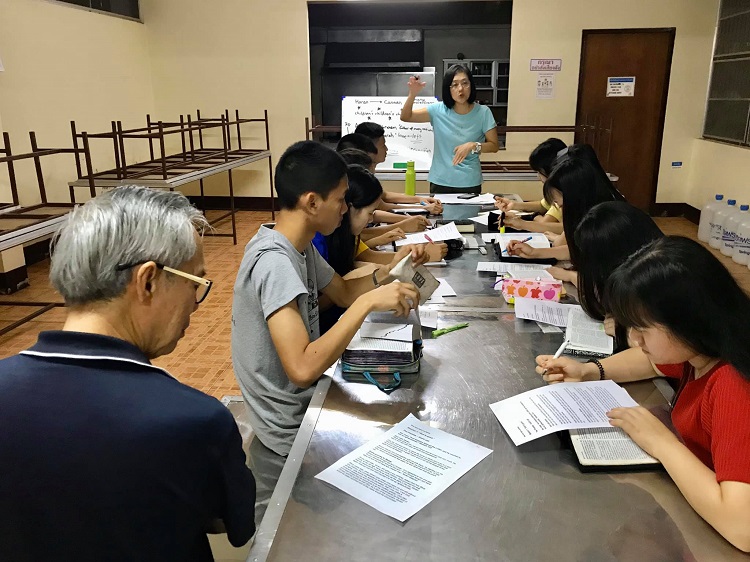 Grace walking the class through the story of God’s promises to Abram, from Haran to Canaan.

We started early on Saturday at 6:45am for morning devotion led by Beh, followed by breakfast before proceeding to Kathy’s Home to set things up and get ready for the full day programme. We were all prepared for a very tiring day ahead!

The programme started with all the children gathered together for opening songs led by Esther, Jonathan and Grace.

The children singing along enthusiastically.

The children were then divided into three teams with each team comprising of children from all three English proficiency levels. The teams were given 90 minutes to rotate through three stations – Bible Story Station, Games Station and Song/Craft Station. We completed two 90-minute rotation before lunch. After lunch, the children were gathered again as a big group for songs followed by another 90 minutes of station rotation.

At the Bible Story stations where the teachers told the children stories of God's promise to Abram at Haran to finally entering the Promised Land.

The children used their creativity and imagination at the Craft Station to make things such as Presto Chang-O Book and DIY Kaleidoscope.

(L) At the Games Station, the children were blindfolded and taught to put their trust in God as He leads them into the Promised Land. (R) Stephen, Jason and Joanne supervised the children in a game of Captain's Ball where the rules were cleverly tweaked to highlight unfairness. They were subsequently taught that despite the circumstances, God's goodness will shine through it all.

Through games, songs, craft and the Bible stories, the teachers reminded the children what they had learnt and made conscious effort to relate these lessons to their lives in Kathy’s Home, in schools and even in the villages. The constant reminder was, “regardless of their different circumstances, God is good.”

The teams were also given time to prepare a skit each from one of the Bible stories they learnt that day, for presentation on Sunday. By the end of the day, the children had lots of fun and the teachers were exhausted.

In the evening, we had a Thanksgiving Service for Kathy’s Home as we gave thanks to God for His twenty years of faithfulness to Kathy’s Home. We met many Kathy’s Home alumni and it was wonderful to hear of God’s goodness and work through the different people in the history of Kathy’s Home.

During Sunday’s morning devotion, Siew Kim drew from Deuteronomy 2:7 a timeless and tender reminder that God always seeks to bless us, always knows what we are going through, is always with us and always provides what we need ahead.

The encouraging devotion prepared our hearts as we started the day’s programme at Kathy’s Home with the final VBS session. We were thankful for Mak’s willingness to move Sunday Worship service to after this session so that the children can hear the final story of how God brought His people into the Promised Land before Kim Song's sermon on how God is fair, just and loving. The final game for the Game Station was also more contemplative. Stephen and Joanne had the children illustrate their thanksgiving on pieces of paper that were stringed together and hanged in the hall.

For Sunday Worship, Kim Song delivered the sermon focusing on the plight of the Israelites in Egypt as they suffered from the suppression meted out by the Pharoah. Even under those unfair circumstances, God was good, sending Moses to bring to fruition His plan to deliver His people. The sacrifice of a year-old male lamb in every household during the Passover was the perfect setting for God’s later present of Jesus to mankind as the new Passover Lamb. God is therefore fair, just and loving.

The finale of the VBS was the presentation of the four Bible stories in skits by the children and the teachers. They were full of creativity! It was indeed the highlight for many of us, not just for the fun and laughter, but also to see everyone’s willingness to put up the skits (teachers included) and the full participation of all the children telling of God’s stories even with their limited English. 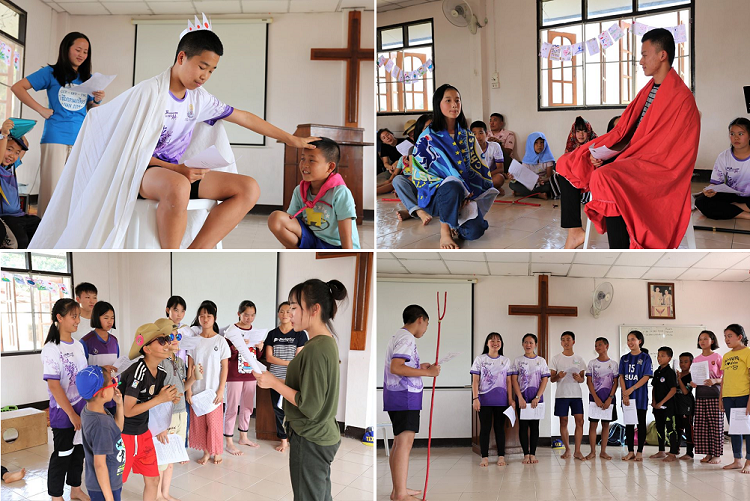 Clockwise from top left: Pharaoh and Joseph in happier times; Pharaoh demanded that his Prime Minister go harder on the Israelites; Moses prepared the Israelites for the Passover; after having crossed the Red Sea and leaving behind the lost years spent in abject slavery in Egypt, the Israelites grumbled and complained that they do not have enough food and water in the wilderness. Still, God remains faithful, true to His Promise to His people.

And that concluded the VBS at Kathy’s Home.

We were back in Singapore on 9 March, well before the advisory on 15 March from MOH to defer all non-essential travel abroad as well as the kick in of the stay home notice etc. We thank God for His enabling, protection, and providence from the start to the end. Indeed, God is the one who has brought this VBS to completion.

Do check out Kathy’s Home Facebook for more photos!

Singing to One Another, Again!