Is it sufficient for us to study scripture? Is it enough for us to belong to a church? Pastor Ian expounds on why it is also important for us to behave in a fruitful manner, in line with what we know and whom we belong to.

It must have been deeply troubling for the Pharisees and religious teachers to hear. They were guardians of the law. There was no one in all of Palestine who knew the scriptures better. They had studied it and they had memorised it.  They had even kept it in little boxes tied around their heads.

But then Jesus said it: “Truly, I say to you, the tax collectors and prostitutes will enter the kingdom of God before you (Matt 21:31).”

In His parable of the two sons, Jesus pointed out that it was not enough to know something (believe); it was not even enough to be a part of the family (belong). We are consistently called to act (behave) in ways that bear evidence of what we know and to whom we belong. Why? Because evidence of our spiritual heritage is best seen in our behaviours. We are trees that are identified by our fruit (Matt 7:15-20).

Greg Laurie tells the story of a little boy who went over to his pastor’s house to watch him do some carpentry work. After the boy had watched the pastor work for some time, the pastor became curious and asked the young boy, “Son, are you picking up lots of ideas on how to build a bookshelf?”  The boy responded, “No, I’m just waiting to see what my pastor says when he hits his thumb with a hammer.”

The first clear indication of a true heart change is bearing fruit. First, the fruit of repentance (Matt 3:8), and then the fruit that is cultivated in the soil of our hearts by our spiritual Father: love, joy, peace, patience, kindness, gentleness, goodness, faithfulness and self-control.

My prayer for us in the next half of 2018 is that all of us will seek to produce evidence of our faith through our fruitful behaviours, simply because we know that by this our Father is glorified, that we bear much fruit and so prove ourselves to be Christ’s disciples (John 15:8)! 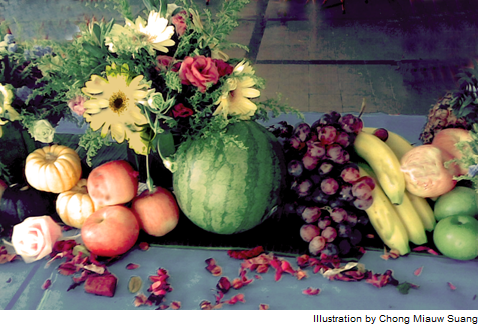