On 26 August, we welcome 8 new members into the GBC family via baptism and transfer of membership. We are overjoyed and we pray that as a church family, we will love them and walk with them in His light.

On the last Sunday of August, we celebrated the obedience of four sisters and brothers in Christ as they came forth to demonstrate what Christ has done for them and in them, by being buried with Him and by His power, rise again. We thank God for their willingness to die to self and place their absolute trust in Jesus Christ to resurrect them and live powerfully in His spirit. 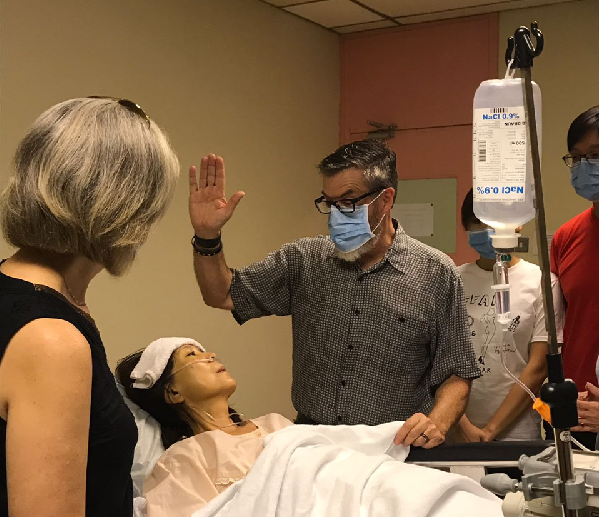 Pastor Ian started by sharing the baptism of Janette Tan who is currently hospitalised due to stage four cancer. One week ago, Janette was baptised on the hospital bed in the presence of her family and friends. A damp towel was placed on her forehead and as Ps Ian baptised her, saying "I now with great joy baptised you, my sister, in the name of the Father, the Son and the Holy Spirit; you are buried with Christ...", a blanket was drawn over her to symbolise the burial with Christ and she was raised up in the newness of life.

When Janette was a teenager, her teacher shared the gospel with her. She was baptised in the ocean but she didn’t understand baptism at that time. Nonetheless, she has always desired to follow Christ and belong to a fellowship of believers. 26 years ago, she found that she had cancer and asked God to give her more time with her loving husband and to see her two children grow up. God blessed her with that time. Later in her life, through her in-laws Teoh Swee Hin and Lee Peng, she was invited to GBC and she found a home for her heart in the single ladies' Bible study group. We are so grateful for this group of single women at GBC who welcomed Janette into their midst and loved her into Christ even though she was different from them.

A few weeks ago, when Ps Ian and Sherri visited Janette at the hospital, they asked her if there's anything they can do for her. She said, "No, I am at peace, now every thought I have, I want it to be of Jesus." What an extraordinary example for all of us, that we will give every thought in this world for Jesus!

Are you thinking of Jesus as Janette is?

"...if the tent that is our earthly home is destroyed, we have a building from God, a house not made with hands, eternal in the heavens. For in this tent we groan, longing to put on our heavenly dwelling...So we are always of good courage. We know that while we are at home in the body we are away from the Lord, for we walk by faith, not by sight.” 2 Cor 5:1-2,6-7 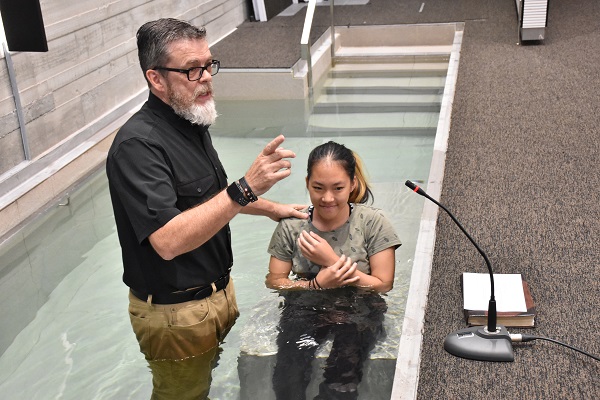 Emily grew up in a Christian family and though she knew about the gospel and learnt about the Bible in church and Sunday school, she never comprehended what it truly meant to be a Christian. She felt like she was "walking in darkness most of my life and I found myself drifting away from God and falling into temptations of sin and earthly desires." Emily used to be a competitive gymnast — it was something she really enjoyed and saw herself doing for the rest of her life. However, an ankle injury changed all that and she had to give up this dream and quit gymnastic. This made her rethink her priorities and she came to realise that this love of gymnast was an idol in her life and the Lord knocked it down to draw her near. She began to turn towards Christ as she read the Bible, both by herself and with others in church. She now professes that she accepts Jesus Christ as her Lord and Saviour and intends to follow Him all the days of her life. 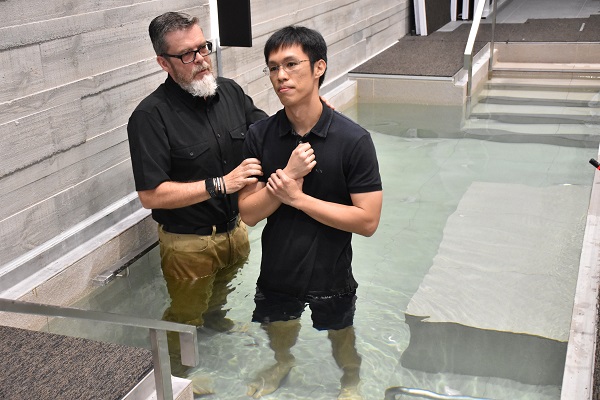 For Jian Hui, 2015 was a life-changing year. It was the year he was introduced to Bryan Tan (a member of GBC) who explored the fundamentals of the Christian life with him and encouraged him in his Christian walk. It was also a year when many personal events affected him greatly. However, God pursued and refreshed him through the weekly Bible study sessions with Bryan and the growing community of Singaporean Christians in Ireland. He was touched by the truths as well as Bryan's life and testimony of how a child of God should live. He saw the goodness of God, a God who has never let him down, and decided to surrender to God. Bless the Lord indeed for the men and women who live lives worthy of the gospel! 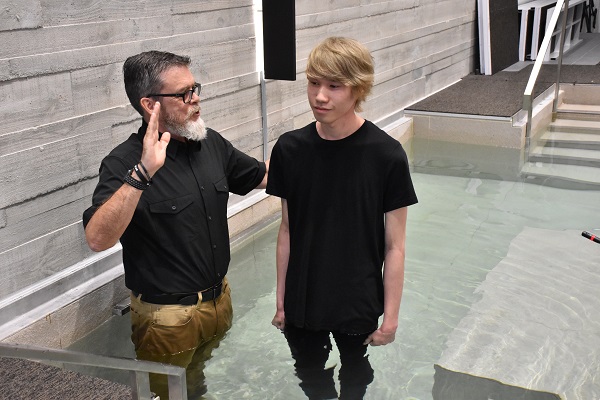 Samuel was born and raised in the Anglican church. His mother was a staunch Christian and suffered from a long battle with cancer. During that time, people around him were proclaiming that she would be healed but the fact that she eventually lost the battle made him feel betrayed. He also thought God was punishing him. It was a very difficult and hurtful time. Many things happened after that which put his life in chaos and he left church. About a year ago, as he was going through a tough time, he felt that he was less angry with God and wanted to return to church. His friend, Toby Wu, invited him to GBC. Returning to church and hearing God's word more made Sam realised that God has been chasing him all the time despite his disappointment, hatred and disobedience. We rejoice with Sam that he has chosen to return to God — who is faithful, who pursues and above all, who loves us tenaciously. 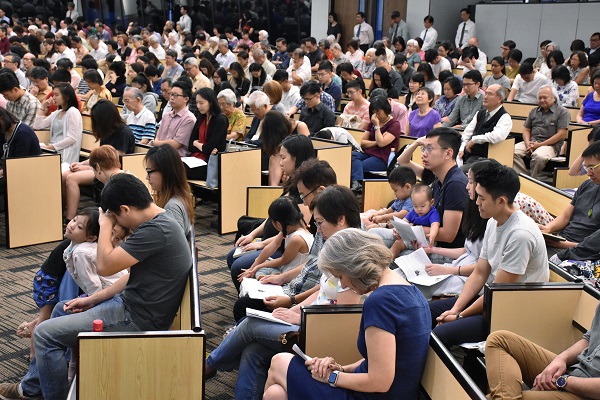 We are so grateful for the testimonies of these four brothers and sisters. As Pastor Ian highlighted, there's a common thread in their testimonies. During the time when they were lost, there were men and women who have been faithful to the gospel and faithful gospel communities that receive them. As a church, we thank God for His relentless pursuit and for Christ who bore the wrath of our sins so that we can stand and live in borrowed righteousness. We pray that our lives, speech and attitude may be used to draw many more to Christ and be a platform for His glory.

Apart from the baptisms, we also welcomed four new members via transfer of membership, they are (R-L): Jason Chong, Patrick Lee, Grace Koh and Frederick Chan. 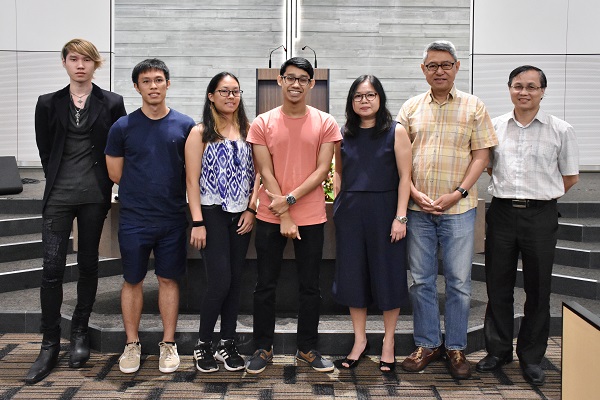 We are overjoyed and we pray that as a church family, we will draw near to Him and walk together in His light! 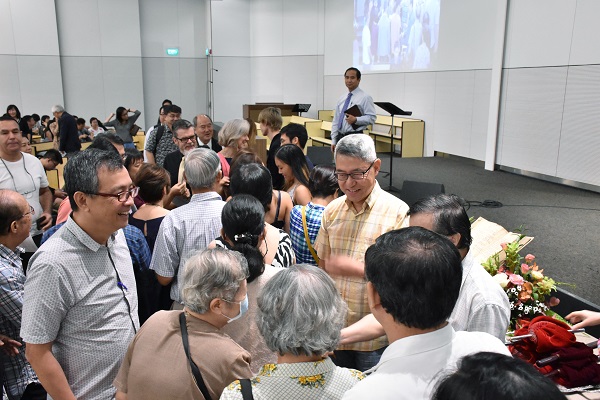 You can watch the baptisms here: