We are so grateful for the ten new members whom God has so graciously entrusted to us. We pray that He will continue to work in them and that they will continually and joyfully live in the presence of God and His people.

Last Sunday, we had the great joy of welcoming ten believers into the GBC family, six via baptism (Benjamin, Lin Hong, Li Heng, Siew Hiok, Jason and Keely) and four via transfer of membership (Kuan Loong, Joel, Steffi and Jeannie). We are so thankful to God for entrusting these precious lives to us and we pray that as a church family, we will continue to love and encourage one another, rejoicing in the presence of God and His people. 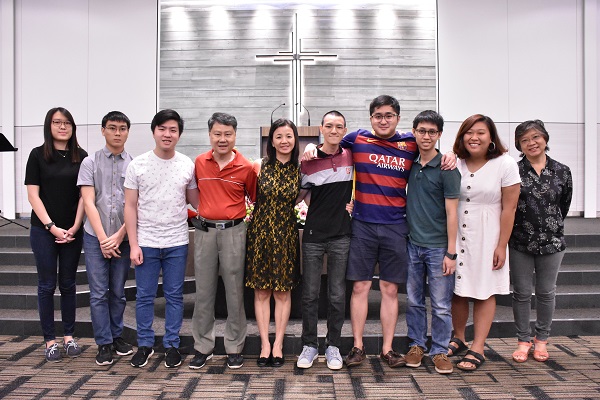 Before the baptisms, Pastor Eugene emphasised again that baptism does not save us. However, it is commanded by Christ to be a display of the gospel: how when we come to Jesus, we are united to Him by faith—we die to our sins with Him, and we are raised with Him to new life.

We rejoiced with these six believers who publicly professsed their faith in Christ alone to save them and commit to follow Jesus and fellowship with His people. Below are snippets of their testimonies:

Benjamin shared how God called him by using the people around him to show him His love and grace. He shared, "Through the patience, faithfulness, and love of God’s people—my parents, teachers in children’s church and Sunday school, Samuel Beh who reached out to me for Bible study, uncle Kim Meng who connected me with faithful believers on campus, and Matthew Seah, who would often sacrifice his time for fellowship with me, and the fellowship in campus—I was led to Christ...God’s love is undeserving; therefore, my response is—faith and obedience. At the same time, I saw the need for repentance, as in Romans 6:16: 'Do you not know that if you present yourselves as obedient slaves, you are slaves of the one whom you obey, either of sin, which leads to death, or of obedience, which leads to righteousness?'”

Lin Hong shared that he accepted Christ since he was 9 years old but lost his faith when he became a young adult. He backslid and almost became an atheist but Christ lifted him out of the pit. He shared, "It was at this time that I started searching for the truth. I wanted to know if Christianity is true. I started to study apologetics and polemics, expecting myself to be more convinced about atheism. Surprisingly, my conclusions led me in the opposite direction: I found atheism proved to be too simplistic, while Christianity substantiated itself and was more consistent with reality. My experience denied the existence of God, yet the evidence to the contrary proved to be strong and convincing."

We are so thankful for how God has led Li Heng to Him since he was young, first through his dad who brought him to church and subsequently through the church family. At the age of 21, Li Heng took the step of obedience to be baptised as a public declaration of his faith and was baptised by sprinkling of water. As he learnt more about the significance of baptism by immersion at GBC, he felt led to "get baptised by immersion to fully obey Christ’s command, submit to the authority of this church and to formally join GBC as a member." Hallelujah!

The Loi family joining Siew Hiok in the baptismal pool.

Siew Hiok shared that the love of her family brought her to Christ. God led her husband Kuan Loong to Christ when he was a youth and she had always been thankful that God had led their children to Him as she believed that the Bible would teach their children good things and that they would be righteous if they follow God. Thereafter, two events in 2014 led her personally to Christ.

"Firstly, my mum fell ill very suddenly and was admitted to ICU for 10 days. During this period, I kept thinking of what would happen if I were to suddenly leave this world. My husband and children would never be comforted with the fact that I had not known God throughout my life. I would have also denied them the experience of living together as a Christian family. I knew that deep in their hearts they were always praying for my repentance and were saddened by my stubbornness."

Subsequently in June 2014, "While my husband and two younger children were away at a church camp, I saw a huge and bright upright cross while driving along the expressway. It was unimaginable that God Almighty would reveal Himself to me. I was indeed humbled." [In his written testimony, her husband Kuan Loong shared how he had been on his knees praying for God to reveal Himself to her while he's at camp. Praise be to God indeed!]

As Pastor Eugene observed, it is such a wonderful picture of how Jesus saves and for many of us who have family members who are non-believers, we are encouraged to not give up but to find every opportunity to speak to our family and friends of how Jesus saves.

Jason came to know Jesus through his dad, Kuan Loong, who brought him and his sister, Jolene Loi, to church. He shared how the youth care group was a huge pillar of support for him during the dark challenging times of his secondary school years. It was also during this time that he started to grow and learn more about God. After completing his secondary school, he studied overseas for two years where his faith was tested as he faced challenges and opposition. The challenges and opposition led him to delve deeper into the gospel. He shared, "God graciously provided me with a church I was comfortable with, and also Christian students and staff who helped guide and nurture me in my faith. My personal struggles worsened, but this made me turn to God to seek words of encouragement. Verses such as Philippians 4:13 'I can do all things through him who strengthens me' helped me to persevere. As time went by, I slowly felt better due to the prayers of fellow church members and God’s healing hand...My journey has been full of ups and downs but I am thankful that Jesus Christ provides, heals, loves and died selflessly for me that I may gain eternal life."

Keely came to know of the profound love of God through friends that He has surrounded her with. She shared, "My heart began to change as God led me to attend a Bible study led by some of the young adults at GBC. My eyes were opened to the person of God described in the Bible. I learnt about the God of Jonah, whose love and grace extends to sinners like us, and who lovingly sent his Son Jesus to die for rebellious sinners...His grace is not mine to earn and His knowledge of who I am never has and never will hinder His love for me. Today, I worship a God whose grace and mercy allows me to despise my sin and not my brokenness."

In addition to the six who were baptised, we also rejoice with Loi Kuan Loong and his son Joel Loi, Steffi Aw and Jeannie Cheang who felt led to transfer their membership to GBC. We are so encouraged by their testimonies on how God in His grace and mercy had been pursuing them and how they chose to turn towards Him and obey Him.

At the end of the service, Pastor Ian so rightly pointed out that none of these new members decided to join GBC because GBC is awesome. He reminded us that we have a history of brokenness, failure and faithfulness and God has shown His mercy and grace to us by bringing these people to GBC and allowing us to be stewards of these new members, His best treasures. 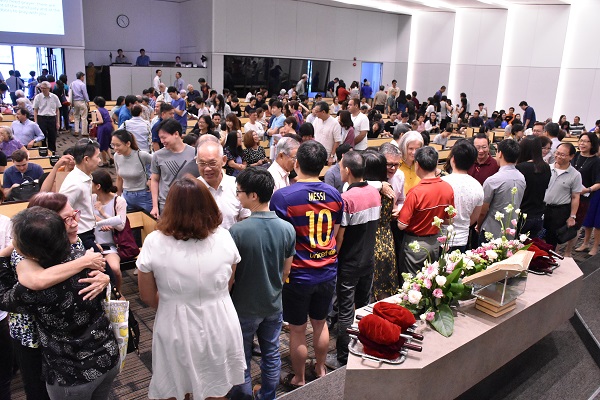 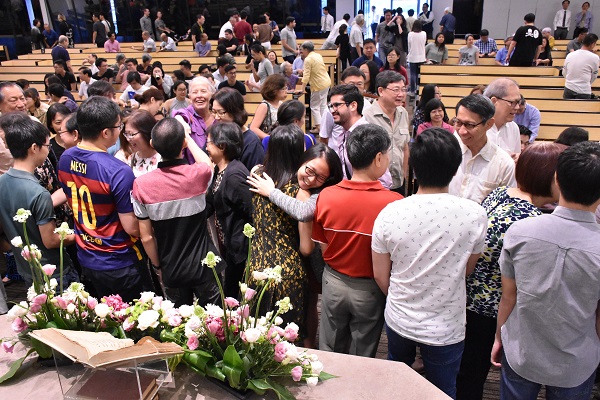 We are so thankful to God for entrusting these ten precious lives to us. We commit to provide an environment that will be safe for them to grow deep in Christ, that we will love them as best we can and give them the opportunity to exercise the gifts that God has given them. We bless God that He has allowed us to be a part of the faith story He is writing in each of them and encouraging us with the fresh joy that they have.

You can watch the baptisms here: