"...that you may declare the wonderful deeds of him who called you out of darkness into his marvellous light." 1 Peter 2:9 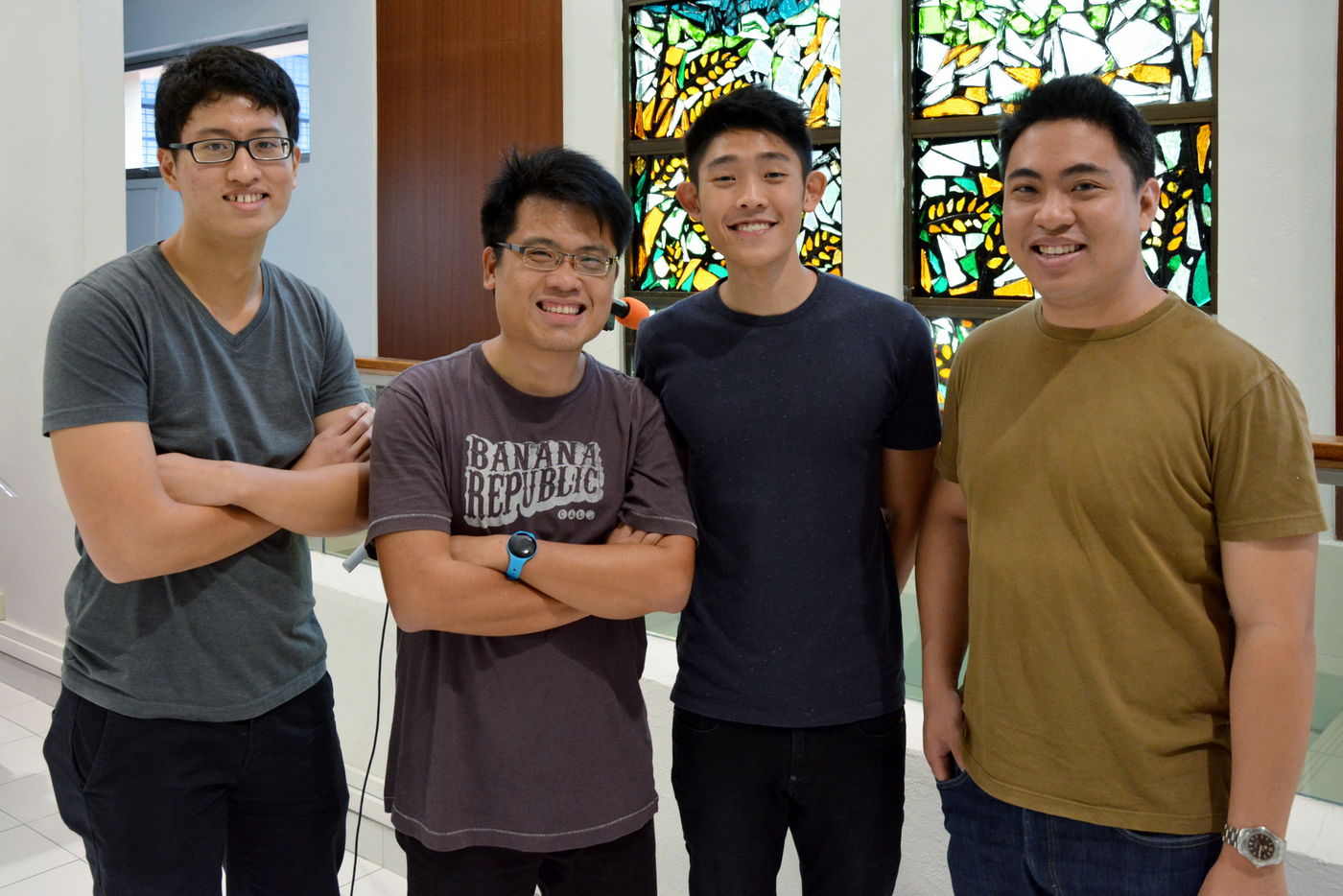 On 13 December 2015, we have the joy of witnessing the baptism of (L-R) Nathanael, Julian, Glen and Zhifeng. We thank God for His wonderful work in each one of them and pray that they will continue to grow in their love and understanding of God.

Below are snippets of their testimonies which we hope will encourage you just as much as they have encouraged us:

"...since I was young, I've heard of Jesus, but as we all know, hearing doesn't equal understanding, so I never understood who He is. At the same time, I was a pretty well-loved kid, and I guess I was a tad spoilt as well...I know that I never needed to undergo much hardship so life was pretty happy-go-lucky, which meant I never felt the need to ask or explore further beyond my immediate world...

Around the point when I entered university, I got close to a couple of Christian friends and started joining them for cell group because of their invites. Through the discussions there I started understanding what the truth about Jesus is - He came down, as a sacrifice for our sinful nature, so that we can be saved from the sinful nature of ourselves. My personal Saviour exchanging His holiness for my sin on the cross, so that I could live. For me, it wasn't a singular turning point but a gradual process of understanding and accepting Christ. As I grew to know Him better, what kept moving me was seeing how much He loved me despite how sinful I am and His willingness to die for my sins...at the start of the journey [of accepting Christ], I noticed how present He was in my life but I also kept having doubts as a new believer of whether or not I was truly saved. This was a point I wrestled with for a few years because I thought that I would feel something new or have an immediate change of heart. What convinced me, aside from discussing it and reading from the Bible, is the gradual awareness of spirit-driven changes in my lifestyle, such as a stronger desire to want to help others in need and to be less selfish with my time/ possessions, feeling excited about telling others about Christ and not being afaid of what those people would think...one of the best changes I have felt is a strong sense of peace and calmness amidst the turmoil that life can throw at me, knowing that God is in control and all things work together for the good of those who love Him."

"I was baptised when I was 16 in front of eighty people out of whom I knew three...To be honest, I had no idea what baptism meant or what role it played in my walk with God. And so I spent the next several years in a spiritual no-man's-land. I prayed a few times a week, I attended church on Sundays, I cried out to God to allay my worldly suffereings, but when my hardships did not cease, I turned away from God, and I no longer went to church. You see, I didn't understand the gospel, and I didn't know Christ...

When I returned [from the USA], a friend of mine asked me if I wanted to go with him to a Bible study on the book of Genesis, and I said yes. Although when I was younger, my parents brought me to BSF every week for years, that evening, for the first time in my life, I attended a Bible study because I personally chose to. What I heard that Wednesday night blew my mind...I felt like I was reading the Bible for the first time, hearing about God's delight in the original creation and the disastrous judegement...because of our fall into sin and rebellion...To my amazement, I developed a hunger to learn more...and I returned to the Bible study every week. I began a one-on-one study with a friend and he led me through key passages that taught me about our loving God, sinful man, the salvation that God provided in His own son, Jesus Christ, and how we have been called to respond with repentance and faith...

I began attending GBC in January 2014...I could see that here at GBC there were families who really were involved in each other's lives and not just the lives of their own families...After years and years of not knowing Him, after a lifetime of hearing the Bible preached yet having understood nothing, it was through His grace and His mercy that He decided to bring me back [from the US]. He reached out and wrenched me halfway across the planet just so that He could reveal Himself to me. Today, I am getting baptised by immersion with a clear understanding of the gospel and a desire to covenant with and belong to this church."

"As someone who only came to Christ recently, I spent many years pursuing a me-centric life, where everything I did was to benefit myself or the people I care about. Then came a personal crisis in 2013 and I was at an incredibly low point in my life. After that, I realised that I wasn't the person that I wanted to be and so I started looking for myself through new experiences. If friends asked if I wanted to have supper with them at midnight, I would say 'sure!'. If they asked,  'Want to go night cycling?' I would say 'Not really, but sure!'. And then I had a close friend who was part of a cell group in the NUS Business School who one day asked, 'Want to go for an evangelistic Korean bbq?' and to that I also said 'sure'. And that was when my journey with Christ began.

This cell group told me of a Man who is also God, who died so that all of us could live. They told me that there is a God who loves you deeply depsite anything that you can possible do. And I reacted as how most people would, incredulous and doubtful. So, many discussions later brought me to Sam Beh and he taught me the Gospel and the four main themes - God, Man Christ, Response. I had plenty of question and he had plenty of answers as well. I then came to GBC for sermons and would stay for SDS sometimes. I also started attending the YACG sessions. At each of these sessions, I would feel God speaking to me at that particular point of time in my walk...So for me, there wasn't this moment of epiphany, but by first being affirmed of the existence of God through my life and the people around me and then hearing well-founded explanations of the Bible, I began to understand the nature of God. And as my understanding grew, I began to see Christ as the Son of God...I grew convinced of my sin and the need to be forgiven...I have turned to Christ as my personal Saviour. Over the course of the past year, it is no exaggeration that I have entered a new life. I struggled with being open about my new identity in Christ. I would worry about how my friends and family would think differently of me. But as time passed and I grew in Christ, I also grew in confidence in Christ. His teachings have had such an undeniable impact on my life that I can no loger see myself without Him...As such, I am getting baptised today as a outward sign of an inward reality."

"I was born into a Christian family and my parents taught me about God and the gospel of Jesus. So with my young and simplistic mind, I decided to believe in God and considered myself a Christian from then on...Growing up, I think my life was not much different from my 'non-Christian' friends. Like them, my life revolved around my own needs and wants. My primary concern in life was to please myself. But life without God left a void within me which I sought to fill from school achievements, friends and having fun. However, pursuing these 'idols' only left me wanting and there was an incessant sense within me that I had somehow fallen short and was lacking. I tried to ignore this nagging voice and rationalised things out...Subconciously, I would say to myself, "Christianity is good and God probably does exist, but well, it isn't scientific, and is for spiritual people and hence irrelevant to me." So I continued living as I pleased, and oblivious of my spiritual poverty, I became increasingly sinful.

Thankfully, God never let me go. I started attending GBC regularly when I was 17 but the message of the gospel never really sunk in till quite recently. It seemed the catalyst for change was last year's youth camp. Having to lead group discussions...shed light on my fragile understanding of the gospel and my superficial conviction...I then became fixated on questions of God's existence and truth. Looking back, I realise my questioning could not have been coincidental...God must have been hot on my trail, drawing me to Him. I started speaking to many church friends, reading Christian literature and engaging in apologetics material...but the one that ultimately convinced me was that propounded by Paul in Romans 1:19-20 - 'For what can be known about God is plain to them, because God has shown it to them. For His invisible attributes, namely His eternal power and divine nature, have been clearly perceived, ever since the creation of the world...so they are without excuse.' It dawned upon me that I knew God existed because He has chosen to reveal himself to man. It was also through this period of questioning that I finally began to understand what the gospel really meant...one night...I came across a video of the song "We are the Reason"...it was at that point when my sinfulness and the need for Christ to die on the cross for the forgiveness of my sin became real to me. Sitting alone in my bedroom, I began to cry as I realised what an undeserving sinner I was of the grace of God and what a merciful and great God He was. I finally knew what it meant to be saved by Christ.

Having accepted Christ as my Lord and Saviour...I can be rest assured that Christ has already won the war for me. With Christ in my life, I now find myself seeking to please God and praying for greater love for others, for the fruit of the spirit and praying for others too!"