We witnessed with great joy the baptism of Amanda Chiam and warmly welcome Lim Song Huat and Jonathan Lai to the GBC family upon their transferral of membership to the church.

On 26 June 2016, Amanda Chiam professed to the church her faith in our Lord Jesus and was baptised by Ps Arnold Wong with the GBC family looking on with joy. We thank God for giving us this privilege of witnessing this important step in her life and we praise Him for His continual work in her.

In her testimony, Amanda shared how she came to accept Jesus as her Lord and Saviour:

"I was born into a Christian family and growing up, I attended Kay Poh Road Baptist Church. However, church-going was merely a routine to me and I turned up every week out of obligation towards my parents. I did not have a personal relationship with God, nor did I have a yearning to know and obey Him...

Fast forward to JC, I continue living life on my own terms, and I did not place any trust in God. All until a personal crisis happened, and for once I felt like I had nothing in control. I lost everything that once defined who I was, such as relationships, achievements and self-esteem. During this period of helplessness, I turned to God and for the first time I truly experienced the boundless grace and love of God. Although I had many idols in my life which made me feel so empty when I lost them, God forgave me and brought me out of my helplessness. I found myself picking up the Bible and reading His word each time I felt overwhelmed with loneliness and anxiety.

After this incident, I had a newfound desire to want to know God more and to obey His commands...Since coming to GBC, I also attended YACG sessions. Through this process, my understanding and knowledge of the gospel has deepened and I have also come to accept Christ as my personal Saviour. Jesus is my redeemer, and my sins are forgiven through His death on the cross. In the past, I used to worry that Christianity was not for me because I would never be 'good enough'. But now, I know that I am saved through faith and not through works. God's grace extends to an undeserving sinner like me not because I have anything to offer at all, but simply because He loves me." 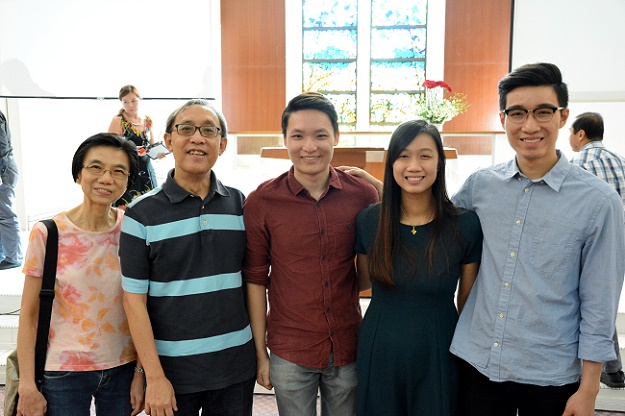 We rejoice with Amanda and her family on this important day of her life.

In addition to welcoming Amanda to the family of God, we also warmly welcome Lim Song Huat (left) and Jonathan Lai to the GBC family upon their transferral of membership to GBC. 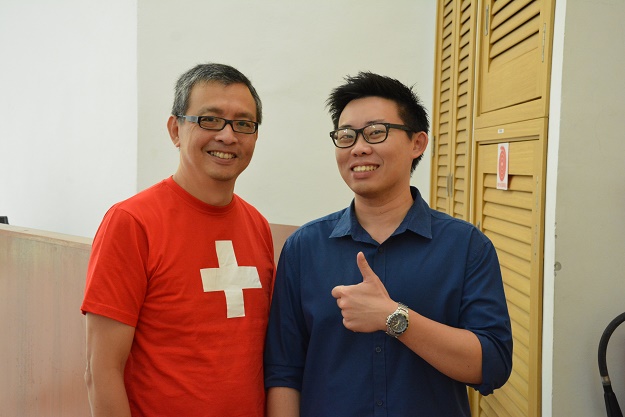 Song Huat is no stranger to GBC as he used to worship at GBC in the 80s and early 90s. Song Huat was baptised in GBC and he and his wife, Eng Khin, were married by Dr Poulson in the sanctuary of GBC in 1988! Song Huat left GBC in 1994 to worship at another church near to their home and migrated to Perth in late 2002. However, his links with GBC were kept alive in a totally unexpected way even when he lived in Austrailia. He returned to Singapore in 2012 when his mum was diagnosed with Alzheimer's and he decided to return to GBC. He believes that God has called him back to the GBC community so that he can continue to grow and serve God and His people. You can read more about Song Huat's journey here.

Unlike Song Huat, Jonathan started to worship regularly at GBC only recently, at the start of the year. We are very encouraged by his testimony on how he came to know Christ and to worship at GBC:

"During my early years, God was a distant figure to me. I remember following a series of ritual – waking up early on Sunday morning, attending sermons and Sunday School, then returning home to lead life as normal. I was going through the motion. I learnt a great deal about the Bible but had no real need nor room for God. I studied, slept, played and kept myself busy. If anything, God was slightly inconvenient because he prevented me from doing the things I wanted to on Sunday. But I never outwardly rebelled. I said and did all the right things but remained a passive, lukewarm hearer of the Word.

In 2001, I went to Melbourne to study. I quickly realised that I had freedom for the first time! I no longer needed to attend church if I didn't feel like it. I began attending irregularly...My moral standards began slipping, my language deteriorated...

In March 2002, a close friend of mine invited me to an Easter Camp in Belgrave, Victoria....The sermons were evangelical in nature and frankly, nothing I didn't already know. One evening however, my friend and I were listening to an evening sermon on the resurrection of Christ. Somehow, despite having heard the message umpteen times, it struck me hard that I was the one who had crucified Christ with my sins...I remember weeping bitterly, confessing and asking Christ to forgive me, cleanse me and relieve me of my burden of sin. I promised God that from that day onwards, I would live for Him and Him alone, asking Him to 'take my life and let it be'.

The next morning, I knew something had changed. I found myself thinking twice before sinning or lying, or saying anything unsavoury. While there was nothing dramatic externally, internally I felt totally liberated. It was a remarkable feeling to be able to communicate to God freely! I began to pray daily and started attending church regularly again, immersing myself in the study of God's Word alongside a supportive Christian community. In Septemeber 2002, I was baptised at Lygon Street Christian Chapel, where I later served and became a member...

Since returning to Singapore, I have attended other churches but have been praying for opportunities to serve God. I was introduced to GBC after attending the TGIF CG in mid-2014. Despite only attending GBC occasionally initially, I saw a Christ-centred, embracing community that is earnest in its attempts to serve God. As I started to know more people, I also began to appreciate its intergenerational interactions between church members...While GBC is by no means the perfect church, it has blessed and encouraged me richly thus far, and is the reason why I'm committing to membership in Grace Baptist Church."

We thank God for these three new members! As with Amanda, we firmly believe that God who began the good work in them will bring it to completion at the day of Jesus Christ (Philippians 1:6).